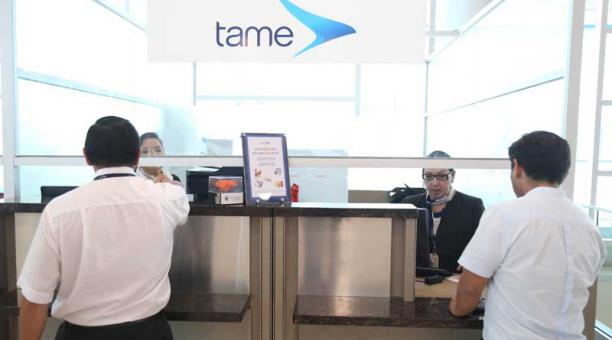 The restructuring plan of the state airline Tame continues this year. The main actions are focused on resizing the size of the company, which implies moving forward with the personnel cut, already announced in 2017; pay the outstanding bills and generate positive financial results.

The chairman of the Board of Directors of the Public Company Coordinating Company, Edisson Garzón, informed that for this year a decrease of 300 people is expected in the company’s payroll, from the administrative area, as a measure to cut expenses.

This was announced in an interview with EL COMERCIO, last Thursday (February 1). The chairman of the Board of Tame, Ignacio Vallejo, said that a full analysis has yet to be made to determine the exact number of employees who must leave the company. Although he did not rule out that the figure is between 200 and 300.

Vallejo explained that airlines regularly employ between 80 and 100 employees per aircraft. Following that standard, the state company should have a payroll of about 1,100 employees, since it plans to operate only with 11 aircraft. “You have to do an analysis area by area. In the short time we have what we have done is change the main controls of the company. Now we’re going to a second level. “Tame’s payroll, up to November last year, was 1,400 employees. In the first stage of its cut plan, in December, the company dissociated some 70 people, Vallejo said, although at first it was announced that there would be 80 employees. The officials who left the company until the end of last year were voluntary resignations, retirements and health condition.

A cut of personnel implies having the economic resources for the respective liquidations. For the 300 employees expected for this year, Garzón estimates that about USD 6 million will be required. For Christian González, former manager of the aeronautical company, a restructuring is a priority to evaluate the optimal profiles that the company must maintain, before determining the excess of employees that the firm has.

“300 people I think a very high amount. Previously it was identified that with the restructuring of Tame should leave between 100 and 150 people, “he recalled. The former manager indicated that the airline also has vacancies for taking out a tender, mainly in the area of passenger attention.

Another of the actions that Tame is taking as part of its restructuring plan is the cancellation of unprofitable routes. On February 3, the firm made its last flight on the Quito-Bogotá-Caracas route. The decrease in the demand for tickets to that destination and the security problems at the Maiquetía Simón Bolívar International Airport in Caracas caused the closure.

Until October of last year, Venezuela maintained a debt of USD 6 million with Tame for the sale of tickets in bolivars that had not been converted into dollars. That debt has already been settled, the company said.

The President of Emco said that another factor that will help alleviate the cash flows of the state company is the contracting of a loan with the Ministry of Finance, of USD 158 million, for a term of 20 years.

“This will allow the payment of short-term debts, but the effect will be long-term,” said the official. Garzón estimates that in June of this year the company will achieve a positive cash flow. Until last November, the airline’s debts amounted to USD 194 million, of which USD 175 million corresponded to long-term debts and USD 19 million to accounts payable to suppliers, in the short term. Another measure that is part of the restructuring program is the sale of 11 real estate assets, valued at USD 4.7 million, and its own fleet, corresponding to five aircraft.

The state airline announced a restructuring plan in the middle of last year. The firm also announced that it would stop flying unprofitable international routes to focus on strengthening frequencies in the local market. (I)