Term to supervise the ex-officials of the correismo is finished 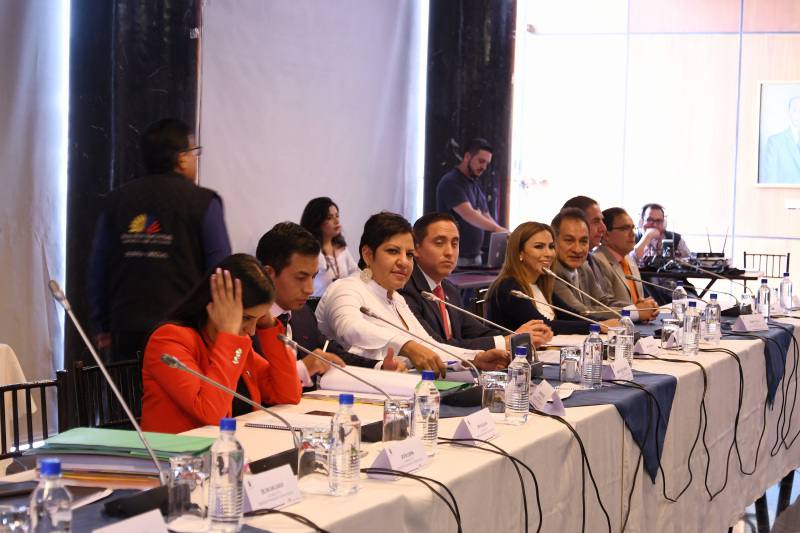 Article 131 of the Constitution empowers the Assembly to make political control of authorities until one year after leaving office. And this May 24 is the deadline for officials of the regime of former President Rafael Correa, questioned by alleged acts of corruption and breach of functions.

Political analyst Vladimiro Álvarez points out that the Assembly has lost time in discussions due to the interference of assembly members close to Correa, “who have the task of continuing to cover up the illicit, or malicious acts, or failures to fulfill their responsibilities of government officials of Rafael Correa …”

Today the Legislature celebrates one year in office and at this time ten political trials were requested, six against former officials of the past regime: former Vice President Jorge Glas (twice), former Minister of Education and current Assemblyman Augusto Espinosa; the former Superintendent of Communication Carlos Ochoa; the superintendent of Banks, Christian Cruz; and the former Finance Minister Carlos de la Torre.

The other requests for trials were against former Comptroller Carlos Pólit, former Attorney General Carlos Baca and the President of the Council of the Judiciary, Gustavo Jalkh (twice). The first two were censored and dismissed, although Polit was untimely because by then he was a fugitive.

Of the lawsuits against former Correa officials, only the trial against Ochoa prospered; also untimely. When the Assembly censured it, the Council of Transitory Participation had already ceased it.

The two court orders against Glas were filed, first by the Council of the Legislative Administration (CAL) and then by the Supervisory Commission, which considered that, when losing the position of vice president for definitive absence, there was no longer a process.

Another trial that the CAL denied was against Espinosa, questioned for omitting administrative actions after allegations of sexual abuse against students during his tenure as minister; and the processes against Cruz and De la Torre still aren’t treated.

Henry Cucalón (PSC-MG) says that, at least in the first months of the administration, Correistas and Morenistas played with time and did not allow political trials. “A lot of time was lost in the matter of oversight, not because of lack of motivation of those of us who committed to exercise it, but because the majority at the time, the 74 members of the ruling coalition, shelved these processes in a good part of this first year.” And in the case of Glas “they did the impossible so that it would not happen …”

But Daniel Mendoza (AP) points out that there were different positions within the ruling party and that with the passage of time his colleagues changed positions and gave way to processes. “You have to understand that political trials are a way to make allegations transparent.”

He believes that despite a series of storms in the Legislative, among these the dismissal of José Serrano as president, this year the Assembly has been focused on the audit area. “In the past, it’s public knowledge, it did not happen that way. Today the Assembly plays a vital and historical role … ”

For Roberto Gómez (from CREO), a lot has been done this year “to try to direct and give justice after ten years of impunity …”.

When the year expired to appeal to ex-fugitives from the Belize Ministry, according to Gomez, it is up to the Assembly to pressure the Prosecutor’s Office to investigate. “The CREO block will continue asking for information and if it finds some crime possibly caused by someone who is no longer subject to political control, because our obligation is to inform the Prosecutor’s Office so that it may proceed …”

Álvarez stresses that other control bodies such as the State Comptroller’s Office, the Attorney General’s Office “and the entire justice system, have no limitations in carrying out the mission of controlling and overseeing.”

Lenín Moreno: Supercom will be eliminated in the reform of the Communication Law in Ecuador