Text amendments were not modified in the debate of the Assembly 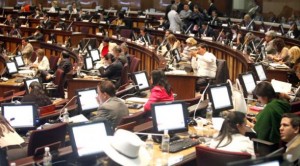 Yesterday, at the plenary session of the National Assembly, a report that confirmed the initial content of the texts proposed by Alianza País to the Constitutional Court was published.

No changes were introduced to the text, because, according to legislators of the ruling party, it was not feasible to submit changes at this point because the diffusion process for 32 social actors has not been sufficient. To this is added their “political coherence” that led them to ratify the original text.

The opposition, meanwhile, warns that within a year they could get a “surprise package.”

Juan Carlos Cassinelli, Chairman of the commission, said there is no particular orientation and confirmed that the text submitted in the Assembly has no changes. “At the end of the 12th month the report for the second debate and changes will be known. I have the impression they will opt for better texts and proposals.”

The Plenary continues today with the first debate of this package of 16 amendments. Some legislators warned it could last until tomorrow.