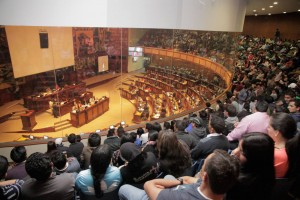 Of fourteen laws, nine were the initiative of President Rafael Correa, three of pro-government assembly members, one of the Allied Silvia Salgado and the other of the Judicial Council.

The list of these laws include the draft Organic Law on Identity Management and Civil Data, which has not yet the pronouncement of the Executive branch and excludes two veto resolutions in January and February of laws adopted in 2014 by the plenary: the Organic Law of Public Electricity Service and the Organic Law of Telecommunications.

From the Executive branch came the reforms to the laws of the Armed Forces Staff, to the National Agricultural Research Institute and the repeal of the Special Law on the Coffee Sector, the reforms to labor and social security called Labor Justice and Recognition of Household Work.