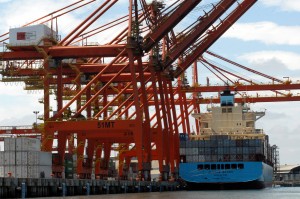 The Minister of Transport and Public Works, Walter Solis, said that the state company Dubai Port World (DP World) is about to submit a formal proposal for the construction of a deep water port in the Posorja town, a rural parish of Guayaquil.

“This company [DP World] in the coming days would deliver a formal proposal. We have had meetings with the highest authorities of the country and they have also shown their ability and interest in investing in Ecuador,” said Solis to the Andes public agency.

The minister hopes that the award is realized in the first half of 2016. He also indicated that this proposal does not conflict with the intention of the mayor of Guayaquil, Jaime Nebot, of concessioning the construction a port in the same locality. “These are complementary,” he said.

The construction of this new port was a point of disagreement between Nebot, -who suggested Posorja as the chosen town to build a new deepwater port without affecting the current seaport in the south of the city- and President Rafael Correa.
Translated into English by Pierina Abad

The private sector seeks ways to address the economic situation