Bananas, one of the main export star products of Ecuador, is not a simple fruit, it is the special ingredient of some twenty recipes that today are exhibited in the first culinary book launched by the sector, in order to promote its consumption in the world. 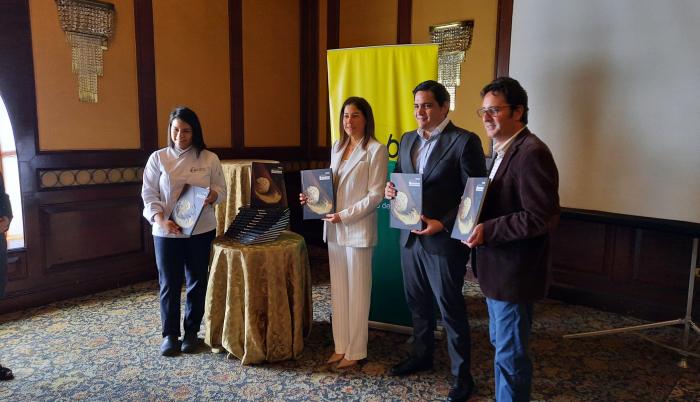 Book presentation. The guide was presented in Madrid, last October.

The guide, promoted by the Association of Banana Exporters of Ecuador (AEBE) , in collaboration with the School of Chefs of Guayaquil, seeks to demonstrate the dishes (sweet or salty) that can be made with bananas, in all its states. José Antonio Hidalgo, director of the banana union, pointed out that the project was born 5 months ago, within the framework of the development of a plan to promote the fruit, which identified the need to teach the various ways of consuming it, including in the market local.

The intention is not only to guarantee the sustainability of international demand, using this guide as a complementary promotional tool at fairs, but to promote greater domestic consumption. In the country, the annual per capita consumption is barely 2.5 kilos, versus the banana that reaches 30 kilos. The sales potential, he said, is here too. “The idea is to reach the consumption that we see at the banana level and at the fruit level in Europe.”

The guide, which proposes the preparation of gourmet dishes such as a casserole or an ice cream based on bananas, was presented at Fruit Attraction 2021 in Madrid, at the beginning of October, then at the XVIII International Banana Convention.

This November 30, 2021, AEBE made an official presentation of the work in Guayaquil, for the general public. “We believe that we have to boost our sales in international markets, but also have the alternative of placing more fruit in the domestic market, if it remains.”

Now that the industry registers certain export drawbacks, given the lack of containers, this is an option that would serve to avoid a decline in sales. Until October, according to AEBE, the sector exported 315 million boxes, that is 2.7% less, compared to the same period as 2020.