The calling through Twitter is measured on the streets 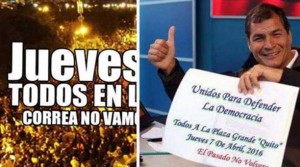 From social networks to the streets, how many steps are there? That could be verified today, April 7, 2016, if the new call for protest against the urgent economic bills discussed at the Assembly, made through this way has strength. And two weeks before President Rafael Correa and the opposition spoke of “battle” and a “war” in the cyberspace.

On March 30 the package of tax reforms came to the Assembly. And the Facebook account “I Protest” created an event against these changes. From March 31 until yesterday afternoon there were 8,687 clicks on “attend” and 11,043 in “I am interested.” The calling will be held today at 17:00 at  De los Shyris avenue. A space that has concentrated in Quito since 2015, the voices of rejection to the Government.