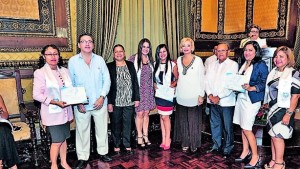 As part of the events that have taken place throughout March for the ‘Women’s Month,’ the Guayaquil´s City Hall held a ceremony dedicated to the most important females in different professional areas of the city.

The City Hall was the venue chosen so that entrepreneurs, security and transit authorities, educators and journalists receive this recognition.

Councilwoman Grecia Cando Gossdenovich was in charge of starting the event, which was attended by other councilors, from Samborondon, Guayaquil and Daule.

“Duality was imposed in the world to make way for humanity,” exclaimed Cando, who got a rain of applauses from the audience.