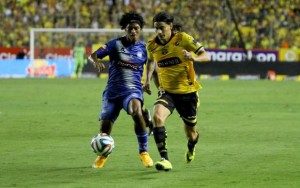 For the first time, after a match between Emelec and Barcelona, there will be a national champion. Today both teams will play at 16:30 at the Capwell stadium to define the crown of 2014.

After the 1-1 score, on Wednesday night at the Monumental stadium, it was established that a draw blank would favor Emelec, that with equality in the global scoreboard would imply that the goal of Angel Mena has a double value when defining.

Another possible scenario indicates that if the marker is repeated, the champion will be known after the penalties.

On the other hand, a draw of more than one entry per side would  benefit the “toreros,” who have not lost the recent three games in the “Clásico del Astillero.”

Emelec: The Ecuadorian Champion for 2014, after winning 3-0 against Barcelona