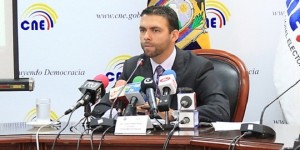 The National Electoral Council (CNE) yesterday began the first meetings to find a solution to the legal vacuum that followed the death of the elected Mayor of Muisne, Walquer Vera, from the political movement Alianza PAÍS (AP).

The Counselor Juan Pablo Pozo, who noted that this vacuum is because the electoral process has been completed and credentials were delivered, but any authority hasn´t still taken office.

He said that the decision of CNE will begin with a legal analysis to determine whether to make an inquiry to the Attorney or the Constitutional Court (CC) on the case, as the elected mayors have not substitutes.

“It is still premature to give a criterion for an exit, that will correspond to the legal department of the Council,” said Pozo.

The Counselor commented that one option would be that Muisne councilors auto-convene the first session of the Council, where the Vice Mayor will be selected, to take over the charge temporarily until a a official pronouncement is released.