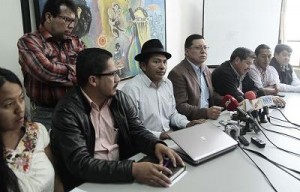 The main leaders of the Confederation of Indigenous Nationalities of Ecuador (CONAIE) and trade union organizations of the country convened their bases on Monday March 2, to attend the People’s Summit: “for the unity, the sovereignty and the defense of the organizations.”

This event will be held on 5 and 6 March at the Universidad Central de Quito and has two objectives: to strengthen the unity of the popular sectors with the construction of a common agenda of struggle and mobilization; and defend the headquarters of the CONAIE, because on Thursday, March 5 is the deadline of the appeal lodged by the indigenous organization, which, in the event of being denied would host a rehabilitation center for young people who are in the process of detoxification of alcohol and drugs.

On the other hand, the president of the indigenous organization, Jorge Herrera, said on Thursday, March 5 that a mobilization to the National Assembly will be held to deliver a proposed of Land Law.