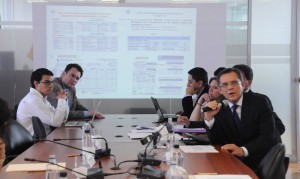 The Government will strengthen its policy of “zero tolerance” to drugs and requires the Assembly to quickly approve a new institutional framework that is linked directly to the Presidency and thus be able to toughen penalties against micro drug trafficking.

For that the Assembly must approve the Drug Prevention Act, which replaces the existing Law of Narcotics and Psychotropic Substances, and that is pending for second debate since April of this year when the first was held.

This bill makes the current National Council of Narcotic and Psychotropic Substances (CONSEP) in a technical secretariat that is no longer attached to the Attorney General, but directly to the Presidency of the Republic. It also creates an Interinstitutional Committee chaired by the president.

In the Organic Integral Criminal Code (COIP for its Spanish acronym), the punishment for illegal traffic is four scales: the minimum is of two to six months, the median is one to three years, the high is five to seven years and the large-scale is ten to thirteen years. In the Consep table, for example heroin minimum scale ranges from zero to 1 gram, median from 1 to 5 grams, the high from 5 to 20 and the largest 20 up.