The correistas can see their leader every 15 days 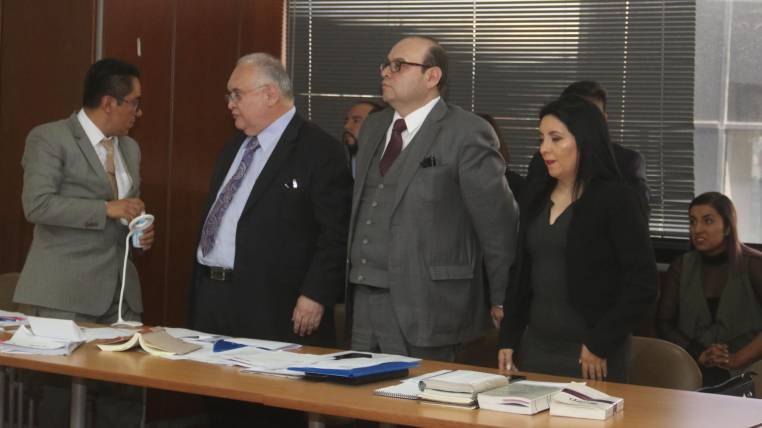 To his incessant trips around the world Rafael Correa has to add one more: to Ecuador, every 15 days. Judge Daniella Camacho yesterday imposed the most basic of precautionary measures: present one Monday out of two, starting on July 2, before the Criminal Chamber of the National Court. The former president was linked to the Balda case with charges of conspiracy and kidnapping and may defend himself in freedom. He will not wear an electronic bracelet, as prosecutor Paúl Pérez wanted. You have until July 18 to present your discharge evidence.

Day of long faces in the National Court. The faithful of the ultracorreism arrived early, this time without mingling with the fifty or so people who were demonstrating, perhaps to avoid the tear gas that ravaged them last week. Ricardo Patiño, Gabriela Rivadeneira, Doris Soliz, Virgilio Hernandez, Paola Pabón and other former government officials and ex-officials went directly into the building and sought a fight with the guards, always rigorous when controlling visitors.

“Let us pass!”, “We got there first!”, “Put order!” Patiño exclaimed with a face of few friends when he saw that the policemen allowed Balda’s supporters to enter while they waited. Being treated as ordinary citizens irritates them, and they make it loud. Supporters on one side and the other took turns in groups of fifteen. When the room was filled, some correístas (Marcela Aguiñaga, Juan Cristóbal Lloret …) were left out. They could not believe it, it seemed an outrage.

In the room of sessions of the eighth floor, Patiño and friends occupied the first rows of the block of chairs of the left, next to the entrance. There passed Fernando Balda, stood next to them and saluted above their heads with his supporters. Caupolican Ochoa, Correa’s lawyer, was already waiting in his place and moved to confer with Patiño from time to time.

The audience started with the reading of the elements of conviction in charge of the prosecutor (see page 3). Paúl Pérez asked for two precautionary measures: periodic presentation of the accused before the Consulate of Ecuador in Brussels and placement of an electronic bracelet. Felipe Rodríguez, Balda’s lawyer, added very little. He welcomed “the objectivity of the Prosecutor’s Office”, noted that the defendant will be able to defend “the way no one was allowed in the last ten years” and faced the correistas of the first rows: “I do not know if something cause the public grace, “he said looking at them.

Caupolican Ochoa dismissed not only the elements of conviction, which he described as “tricks”, “subterfuges” and “fallacies”, but the same suitability of Prosecutor Perez, not yet possessed by the Assembly. He elaborated on the president’s tight schedule of international commitments, which would prevent him from presenting himself every two weeks, and was shocked by the idea of the electronic device. “It is improper, it is unreasonable,” he said with his nineteenth-century rhetoric, “to offend the human greatness of the former president.”

Judge Camacho withdrew half an hour to prepare her decision. “No one leaves the room,” she said, “I abandon it.” She returned with a foreign service law under her arm and the novelty that consulates do not have jurisdictional functions. She asked the prosecutor to reformulate his request. The prosecutor insisted: “it is his attribution to designate the authority before which the accused must be presented.” That was when the great surprise of the afternoon came. “The accused will appear every two weeks before the National Court of Justice in Ecuador,” said the judge. For the Correistas of the first rows it was as if the earth opened under their feet. Ochoa’s plea was useless: the judge was unmovable.

Patiño is already in the middle of the road, haranguing no more than thirty rabid correístas who no longer only throw eggs but also stones and bottles of water to anyone who appears through the door of the Court. Thirty correístas who give vent to their hatred and prepare for the mother of all battles.

The defendant insists on his innocence

He was aware of the result but avoided making personal comments. Until 5:35 pm (Ecuador time) he only replied in his Twitter account the messages of support from his followers. In the morning, however, he insisted that he did not know the details of the alleged kidnapping of Fernando Balda and criticized the justice system. “I do not know why they link me, or what they link me with. But that is the current situation of the country. A prosecutor put to finger, links me to judge me a Justice System managed by a Council of the Judiciary also hand-picked. And he insisted that, since November, there has been a “fierce judicial” persecution. “I believe little in the current quantum justice and nothing in the dictatorship that the country is living,” he wrote.

The surrogate comptroller Pablo Celi sent the prosecutor Paúl Pérez a first part of declassified information on the special expenses used in the case Balda. The prosecutor had requested a report on the special expenses of the Senain and the accountability made by that agency in which there would be accounting evidence of the kidnapping. The comptroller attached the list of Checks credited and collected between June 1 and August 31, 2012. In the annex of the operations of the Senain, sent to the Office of the Prosecutor, in the same period reports “Operation Kidnapping, collection of information paid to related persons by $ 43,300.” (I)