The creator of Nutella and Ferrero Rocher chocolates passed away 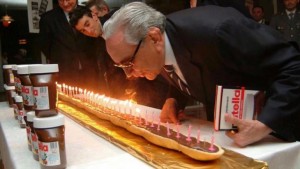 Michele Ferrero, the candy maker and creator of the chocolate and hazelnut Nutella, who helped to raise several generations of Italians and define the Italian sweets, died at 89 years old, authorities said, as reports the AP agency.

The president of Italy Sergio Mattarella praised Ferrero, whom he described as one of the protagonists of the Italian industry. He said that “always one step ahead of his era thanks to his innovative products and tenacious work and reserves.”

Ferrero was the patriarch of a productive family empire best known by the Nutella and Ferrero Rocher chocolates.

Forbes placed Ferrero and his family at the site 30 on its list of the wealthiest people in the world, with an estimated $ 23,400 million fortune.