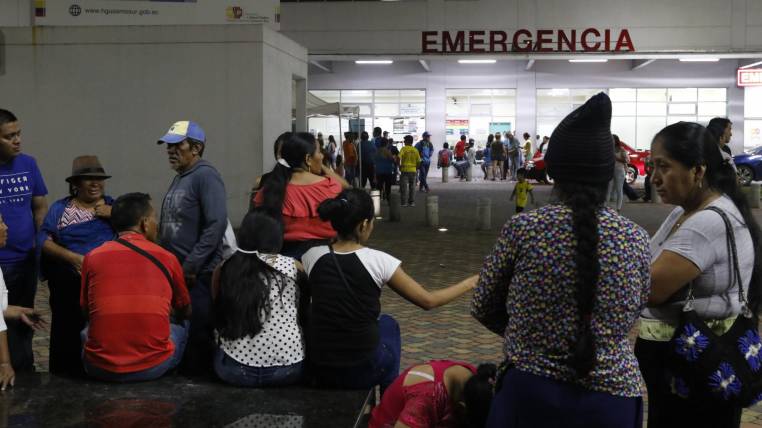 Tension and drama reign in these rooms. EXPRESO goes through four hospitals. Attention is not always adequate.

Dying is an option in the Emergency areas of any hospital in the world. This is the only way to understand the panorama of lost, tense and even sleepy looks from the sleepless hours that one recent morning and night was observed at the foot of the areas of four medical complexes.

It happened at the foot of that monumental building that the Government of Rafael Correa inaugurated at midday in January of 2017, in the South Guasmo. The poster announcing the construction of the work is still in place. In large letters it reads: 665 beds, while other small ones clarify that only “474 are censuses”.

In short, in this modern and newly opened building there is a rolling chair that has become a determining object. While in the Emergency Hospital Teodoro Maldonado Carbo (IESS) there are seven to collect and transfer patients, whether they require it or not, here in the center of the south there is only one, which is intended for those who can not mobilize.

Those who show pain, but who can take steps -from pregnant to old; with fracture in some of its upper extremities or signs of colic, EXPRESO stated during a morning tour, they do not have the option to sit down. The guard who stands at the entrance tells the relatives and the patient “to follow”, “who later attend to them”.

By midnight, on the other hand, that important vehicle disappears. The relatives ask for help, they cry for transfer, but in the absence of support, they have no choice but to carry them by weight or to provide support so they can do it on their own.

But it is not the only questionable. As is the case with Maldonado Carbo, where the family member has been fitted with a roofed shed 50 meters away from where their relatives are torn between pain and death, in the Guasmo hospital, only 15 people fit under a canvas awning. The rest, walk under inclement suns or torrential rains, in the winter, or intense cold in summer.

“It seems that they do not want us here,” said Josefina Guaman, a vegetable trader who brought Durán from her home with a strong colic at dawn on Tuesday. It was already midday and she was still sitting in the inner parking area of the sanatorium.

José Pin, 38, and security agent, was nine days in the intensive care area. “Although he does not respond, he is very well taken care of”, says one of his sisters, who has spent the same number of nights sleeping almost out in the open. There, two relatives are accepted per patient. The site has no walls. Two private guards, a few meters away, offer security. They do, in a closed booth.

Last week EXPRESO asked the directors of this and two other hospitals (León Becerra and Luis Vernaza, affected by the amount of money that the State owes them), to spend the night in the Emergency area, precisely to meet the staff doctor and nurse, deepen their work, the type of surgeries and procedure performed, and observe what is the treatment towards the mourners. However, based on the Patient Rights and Amparo Law and the confidentiality that their therapies require, the request was denied.

In the sector of Ceibos, where a year ago IEES Hospital opened and whose services have been the subject of several criticisms, the treatment of relatives and affected remains a worrying topic.

“We have to wait hours for a diagnosis. My sister-in-law has been inside for two hours and nobody deigns to tell us anything. We do not know if they will intern her or intervene, “said Martha Llaguno, a relative of the woman who arrived near 7:00 p.m. with a respiratory problem. Other users similarly complained about the care inside the center.

That they delay, they said, that there are no reagents to determine a diagnosis immediately or the stretchers necessary to check them. “My pregnant wife recently had a relapse and was referred to another center due to lack of supplies. On another occasion, it took 3 hours to attend. Today, which has been decompensated, I hope, I beg you not to have problems “. The situation is exasperating, said James, who requested to keep his name anonymous.

In the Luis Vernaza, another of the visited sites, the relatives have a waiting room, with an air-conditioned environment and a large television screen, but since it is not possible to place lines there, many of them (because only one member per clan can enter) They prefer to leave the place and sleep on the sidewalks, at personal risk. This implies certain insecurity, the sector -Cerro del Carmen-, is considered a red zone. “They steal at any time,” says the owner of a local. “Criminals are not afraid or because there is a UPC 100 meters away,” adds another.

For the merchants, the crisis that the hospital goes through (this belongs to the Board, and the Government owes him $ 112 million), it is evident in the number of patients who arrive today especially at night. Although on Friday and Saturday, there is more movement (possibly due to accidents, they point), the rest of the days the drop is noticeable. “A decade ago, the sick people arrived without stopping, the sirens would be heard to sound all the time. Now silence prevails. People take refuge in public hospitals, even when the care is not all good. ” It weighs free, says Ernesto Gordillo, owner of a grocery store.

Misfortune grants truces. That happened around 11:00 in the Hospital del Guasmo, where the inmates attended to minor cases. Different was around 10pm. In just half an hour, up to 10 vehicles entered, including ambulances and private cars. Each one arrived with people who needed attention. To these were added those who lined up in the waiting area.

“These people do not attend us quickly,” says Talía Navarrete Preciado, who arrived at 4:00 p.m. with her 5-year-old son, with a fracture in one of her arms. “Half an hour ago they did the x-ray. All that time my child cried in pain. ”

Andreína Quiñónez Pacheco launched several insults as a complaint because she was not given the attention that she “deserved”. “They think that because I sell candy on buses I do not deserve medicine.” He says he recently spent an internal week at the Guayaquil Hospital because of colon problems. “Now the pain has returned and they say come tomorrow to the outpatient clinic. They did not give me a pill. ”

When the pain is unbearable, when there is fear that the family member brought to the emergency room may not be able to hold on, any minute seems eternal. In the Emergency area nobody understands waiting.

A report detects shortcomings in patient care and safety

Complaints about the quality of care received by patients and relatives in the emergency area of Guasmo Sur General Hospital are heard all the time outside the medical establishment.

One of these complaints came to the attention of the Health Minister, Verónica Espinosa, after the relatives of a woman stated that the patient died due to not being attended to on arrival at the emergency room of the hospital, on the 22nd of February.

“We are concerned about the complaint filed on the #HospitalGuasmoSur … At the time the detailed assessments of the case have been initiated, with the participation of all the authorities involved,” the minister said days later, in a statement.

That same complaint prompted Espinosa to request a monitoring of the processes carried out at the Guasmo Sur hospital and the accompaniment of the Quality Unit.

This with the objective of identifying the critical knots in relation to biosafety, patient safety, elimination of hospital waste, application of regulations and progress of implementation of the processes of provision and quality management.

In the technical report of results, which EXPRESO had access to, several shortcomings that hospital health personnel have, related to the safety of the patient entering the Emergency, Hospitalization and Intensive Care Unit – Neonatal area are detailed.

In those related to Emergency, it is evident that the user does not receive education about waiting times, and visual education is not observed in waiting areas of relatives and companions; the triage service does not have alcohol in gel easily accessible to the health professional at each point of care; the staff of rotating nursing and medical interns are unaware of practices focused on patient safety and that cleaning and disinfection of high-contact areas, such as door handles, door handrails and corridors, is not carried out.

In addition, it is mentioned that health personnel are not very cordial and attentive to the different emergency situations that arise in the service.

As a recommendation, the National Directorate for Quality of Health Services, the department in charge of the report, states that “the General Hospital of South Guasmo will begin the process of evaluating the competencies of health personnel related to patient safety; which will be monitored by a multidisciplinary team formed at zonal level 8 “.

Also, among other points, carry out education actions in the waiting areas of relatives or companions, reporting on standard biosafety measures for the home of the patient, family member and patient companion.

In the hospital of the Guasmo they complain about the drugs. During the trip, 3 of 5 patients, two with respiratory problems and one with a fracture, received only ibuprofen.

Users regret the lack of attention to addicts in public health centers. They protest being treated in Emergencies, even when they arrive convulsing, after 2 or 3 hours. (I)