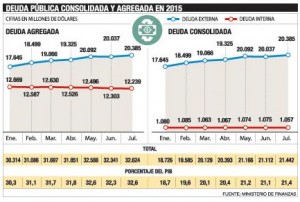 In July this year, the public debt amounted to 32.624 million dollars. 32.6% of Gross Domestic Product (GDP). Ecuadorian law allows a margin of debt of 40%.

According to Finance Minister Fausto Herrera, the country still needs about 3,000 million dollars to cover the deficit this year. That is, to close 2015, the government debt must amount to 35.624 million dollars.

Herrera said during a discussion with the Alianza PAIS bases in Quito, that next year the need for resources will be more than 2,500 million dollars -estimated value and subject to revision-. In total, the public debt would reach 38.124 million dollars. 1.9 percentage points above the ceiling allowed by law with the current GDP. The figure does not include capital payments to be made in the mentioned period.

The second is the new item. The “consolidated” amount does not include the aforementioned obligations and, with this reduction, the account reaches only 21.442 million dollars; 11.182 million dollars less.

Employers fear that this amount is taken as reference to justify the hiring of more debt. In that case, the value of debt is, by far, 21.4% of GDP.

Most of the debt pays a ‘strong’ interest