The Institute Geophysics of the National Polytechnic School said the current process eruptive of the Sangay volcano represents the largest magnitude of the last you decades and has a high rate of rise due to recent emissions of ash . Therefore, the entity raised three possible scenarios in light of the recent events. 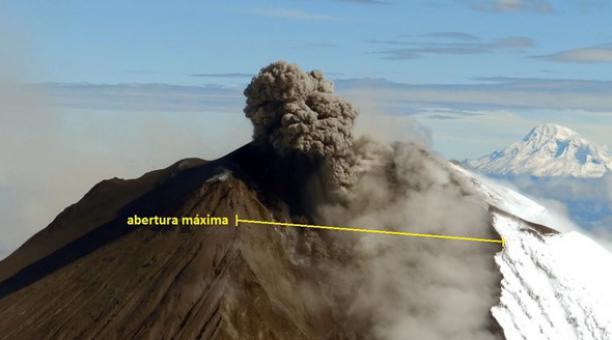 This was announced in a special report, published on March 16, 2021. According to this organization, the most likely scenario is that the eruptive activity of the Sangay will continue “with eventual peaks of activity, slight to significant emissions of ash and potential removal of debris in the creek southeast. “

In a second, less likely scenario, a larger eruption is proposed , given the increase in emissions that occurred in the last month. “You could generate an explosive phase increased as occurred in 1628 during which they were reported sharp falls of ash in Riobamba and around, and in which, according to historical reports, the cloud of ash reached obstruct the light of the sun, for several days ”, indicated the Geophysicist.

However, this entity clarified that the possibility of this happening will depend on the changes that the volcano presents in the coming days. Therefore, in a third scenario (very unlikely) it was proposed that the current activity of the volcano decreases .

The current eruptive process of the Sangay began in May 2019, and has been characterized by continuous emissions of gas and ash. This behavior has been increasing since August of the 2020 , with the eruption of September 20 that year and recent emissions 5, 6 and 11 March 2021.

“This pattern of activity indicates that the volcano has a high rate of ascent and accumulation of magma in its interior, which suggests that the eruptive activity will continue in the coming weeks / months,” said the Geophysicist.

The report also detailed morphological changes associated with the erosion of the southeastern flank of the volcano . In this area, a ravine has formed in which pyroclastic flows are channeled, occasionally released by the Sangay. This was observed during an overflight that took place in June 2020, in which it was evidenced that the ravine was at least 390 meters wide.

Since then, satellite studies have revealed an expansion of that ravine that until last February already exceeded 600 meters wide. This erosion, said geophysicist, continue to find their level of stability or when the volcanic materials find their point of equilibrium .

On the afternoon of this Wednesday, March 17, 2021, the Geophysicist again warned about an emission of gas and ash from the volcano that could exceed 1 000 meters in height. The column heads west of the Sangay.