A positive event complicated the preparation of this article: an unthinkable difficulty of finding a person in Guayaquil who had recently been infected with COVID-19. Something that a year ago would have seemed impossible, because rather in the country one state of exception followed another, due to the high incidence of infected, hospitalized and deceased. 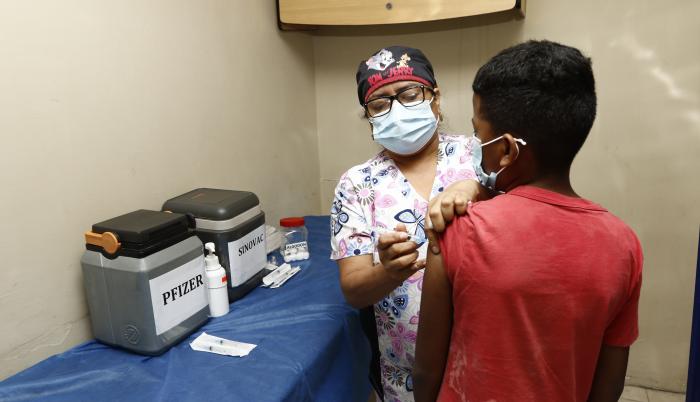 IN THE HEALTH CENTER OF THE PANCHO SEGURA AND QUITO STREETS VACCINATION IS GIVEN TO ADOLESCENTS OF 12 TO 15 YEARS OLD.

No. The pandemic is not over yet, but the numbers are on a downward trend, as the vaccination process has progressed. In fact, as the authorities have indicated and the testimonies of citizens corroborate, the majority of these cases are related to those who have not been vaccinated.

This is recognized by José Cattán, 61, who lives in a citadel in La Puntilla, in the Samborondón canton. He was infected in mid-August. He estimates it by the time he suffered the symptoms, because he is not sure of the day or the way in which he contracted the coronavirus.

He affirms that since the beginning of the pandemic, he maintained biosafety measures. To the point that his wife and daughter were infected last March, but he was not. However, he acknowledges that not having been vaccinated yet and the presence of more contagious variants could have made him more vulnerable.

He clarifies that he does not believe in prejudices around vaccines, but that he had simply decided to wait “until we see what happens” with the drugs.

Despite his age and having several previous operations, not suffering from diabetes or hypertension, and the physical activity he practiced were factors in his favor. He was discharged on September 4, but has yet to undergo follow-up medical examinations.

Around the same time, the 50-year-old actor Andrés Crespo was infected. He attributes it to the fact that days before he was dedicated to caring for a minor who had the virus, since he was not vaccinated (immunization for the population under 15 years of age began in mid-September).

The diagnosis was a high degree of high viral load. Despite this, and although he suffered an inflammatory condition , he did not require hospitalization. Citing his doctor, he says he was helped by the Johnson & Johnson vaccine that was given in the US in May.

After having passed the critical part of the pandemic without becoming infected; and observing the biosafety measures out of conviction and because the protocols in his activity require it, he did not expect to be infected at this point.

“It was a very strange thing. It was a chain: one person had not been vaccinated, he infected another, this to another and this one infected me. It was a person who had not wanted to be vaccinated, being able to do so”, he reiterates.

In his opinion, his case is one more proof that vaccines work. And that prevention must be maintained. “By now people know that you have to take care of yourself and how you have to do it,” he insists.

Three groups, the most contagious

The group from 20 to 49 years old remains the one that is most infected with COVID-19 in Zone 8 (Guayaquil, Durán and Samborondón), says the local director of Epidemiological Surveillance, Katherine Olaya. They are followed by those from 50 to 64 years old; and those from 65 onwards, in their order.

It notes that, by sex, the rate of infected is even between men and women. But because the virus is community-based, it is now difficult to find a pattern for where or how transmission occurs.

At least four killed by avalanche in Chimborazo