The ghost of the contested rulings returns to pursue Ochoa 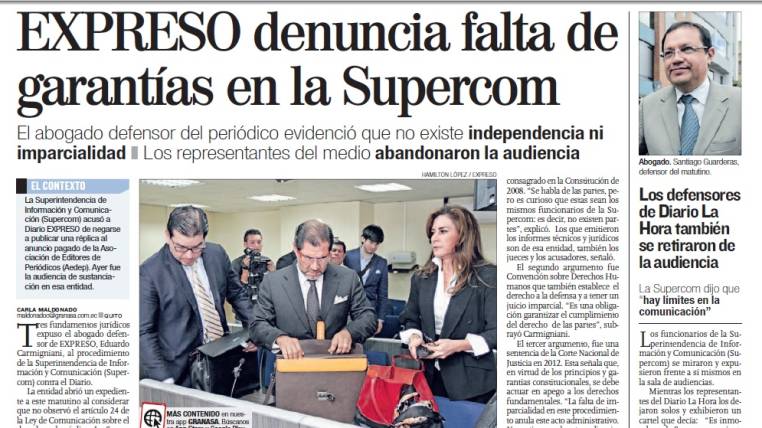 “Bona fide errors”, this is how the Superintendent of Communication, Carlos Ochoa, described this week the mistakes that he considers unlikely, committed in the exercise of his functions.

The owner of the Supercom denied biases against private media and indicated that the application of sanctions and fines has been made in accordance with the Organic Communication Law. “I support all the resolutions we have taken,” he said in an interview.

Among the penalties applied that Ochoa defends swashbuckling is the first sanction against a medium for media lynching. This, registered in 2015, forced the Teleamazonas channel to ask public apologies to the former president of the Ecuadorian Football Federation, Luis Chiriboga, for “threatening his prestige and credibility” suggesting that he was involved in acts of corruption. Chiriboga today serves ten years in prison for money laundering.

A year earlier, the control body fined EXPRESO $ 41,000 for disseminating a report from the Comptroller’s Office that established $ 29 million in glosses for irregularities in the construction of the Pacific Refinery. In the opinion of the Supercom, this investigation, based on a public document and fully contrasted, “would have taken an institutional position on the culpability of the directors of RDP.”

This newspaper was also fined for disseminating a notice (not an article), paid and presented as advertising by the Ecuadorian Association of Newspaper Publishers, entitled “Legal helplessness before the Law of Communication”, which raised the injustices caused to the media by the Supercom.

The agency requested a rectification, as a gratuitous infomercial, to defend its management. Again and again, in the process of validating this defense, Ochoa has argued that the entity is not a judge and part of the procedures that end with the imposition of fines.

However, the agency sanctioned numerous radio stations for divulging the news, recognized by the superintendent himself, that he had altered the Communication Law, changing the numeral of an article.

The process, like those previously mentioned, was contested, but the resolutions were maintained. Now, approved the process to start his impeachment in the National Assembly, the superintendent of Communication must defend the resolutions he ordered against private media and demonstrate that they did not respond to political biases, requests from previous government officials, or attempts to silence the investigation or the freedom of the press. (I)

Monetary Board does not authorize the use of cryptocurrencies