The Minister of Agriculture, Pedro Álava and seven representatives of the country’s banana sector signed an act last Wednesday, April 13, 2022, listing 8 reforms that they commit to execute for the well-being of the industry. Although the agreement includes some requests from the National Federation of Banana Growers of Ecuador (Fenabe), this union affirms that it will not support said document. 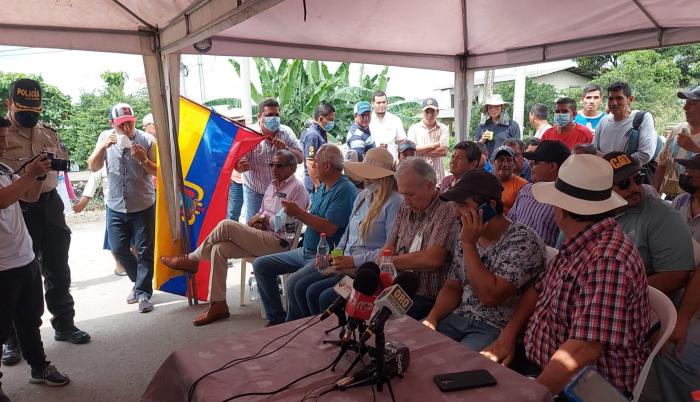 Banana growers from El Oro met this Thursday in Guabo to reject the signing of this agreement.

According to this act, to which EXPRESO had access, the Ministry agrees to “make a contingency fund viable, which will be administered through a trust and financed by the banana producing sector, determining a contribution of $0.5 for each box exported” . The idea is that with these resources it is possible to buy the fruit that, in recent weeks, has stopped being sold, as a result of the war between Russia and Ukraine , two countries that absorbed 25% of the musaceae.

Another of the agreements involves negotiating with the Presidency of the Republic “the elimination of Executive Decree 183, signed on September 2, 2021, which extends the registration and planting of new banana extensions” , at a time when the oversupply of crops and fruit is affecting market prices.

The proposals were made in exchange for producers from El Oro, Guayas and Los Ríos to cease the various demonstrations in the country that they have staged in recent weeks. However, Franklin Torres, president of Fenabe, points out that the latter will hardly be fulfilled because his union will not support the signing of this act.

Torres not only questions that his union has not been invited to the dialogue, but that it was signed a day before the minister appeared before the Assembly , to account for his management. But not only that, he adds, they won’t support her because they don’t trust her word.

“It is true that they are collecting some points that we raised, but we do not trust the word of the Minister. It is said that he will repeal the decree that continues to allow planting, but precisely today, in an interview on a television channel, the Minister contradicts himself He says that he cannot do anything about it because this is a free country. That is, he signs an agreement but 12 hours later he says that he will not fulfill it.”

That attitude, he points out, leads them to think that the offers for the sector will remain in the air. “Something that is worrying. We thought that this agreement was going to make some kind of rapprochement possible, but now we see that part of that agreement was a step prior to the appearance that he had today in the Assembly.”

Other points established by the agreement is to migrate from the Banana MAG Code to the RUC (Single Taxpayer Registry), in order to have greater control in the payment of the official price of the fruit. There is also talk of the creation of a Banana Institute , which supports research, the adoption of technologies in the sector and better marketing of the fruit.