The IAPA analyzes Ecuador situation on issues of censorship to opposition 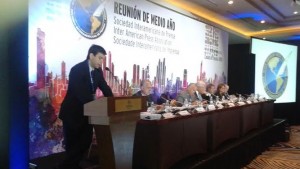 The questionings of the government of Rafael Correa to caricatures of Xavier Bonilla (Bonil) or the jokes of comedian John Oliver, as the closing of the facebook account “Crudo Ecuador” and the account suspension of other opponents on Twitter, were topics that ran at the convention of the Inter American Press Association (IAPA), held in Panama from 6 to 8 March.

“On one hand, there is the society that advocates for the free exercise of the word and even the humor, and on the other, the government, with a campaign to silence and discredit and not only the media but the ones who exert reviews or think, according to this view, they make opposition,” says the preliminary report of the SIP.

On the other hand, the SIP collects versions of the superintendent Communication, Carlos Ochoa, and the Secretary of Communication, Fernando Alvarado, about the possibility of regulating, for example, anonymity in social networks.

The IAPA president, Gustavo Mohme, took the case of Ecuador to point out that “in several countries censorship is being legitimized” and in this case, by the use of communications law to censor and punish.