Time proved them right and also international justice. The Inter-American Court of Human Rights (I / A Court HR) in the Case of Palacio Urrutia et al. V. Ecuador ruled that the State is responsible for the violation of the rights to freedom of expression, movement and residence, and to job security of a journalist and the directors of a newspaper. 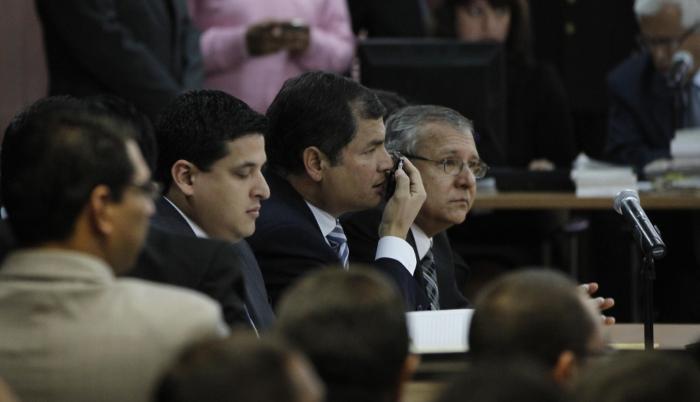 Cassation. In 2012, Rafael Correa spent the hearing glued to his phone and electronic tablet.

It refers to the journalist Emilio Palacio and the directors of the newspaper El Universo, against whom the former fugitive president Rafael Correa launched legal actions for the publication of an opinion article entitled ‘No to lies’, related to the events of the police revolt of 30 September 2010.

The former fugitive president sued in 2011 for insults against Palacio and three directors of the newspaper after the publication of the opinion article, on February 6 of that year. In that same year, the courts agreed with Correa and the directors received a sentence as coadjuvant authors. The sentence was three years and the payment of $ 40 million that in February 2012 ended with the “pardon” of the former president.

César Pérez, one of those affected by the violation of rights, wrote on his Twitter account: “Rafael Correa’s trout sentence to the garbage dump of history.” Congratulations were evident in social networks. Former Vice President Otto Sonenholzner wrote on his Twitter account: “@eluniversocom’s resistance to authoritarianism and arbitrariness was admirable. This ruling sets a clear precedent against the abuse of power. Congratulations to those who, from the beginning, were on the right side. of history.

Guillermo Lasso’s government also said on the ruling. “In the Government of the Meeting, no one will go to jail for saying their opinion and that the fight for respect for freedom of expression is a fundamental premise in their administration.” The Executive promotes in the Assembly a draft organic law of Free Expression and Communication that eliminates the crime of slander and infractions against honor.