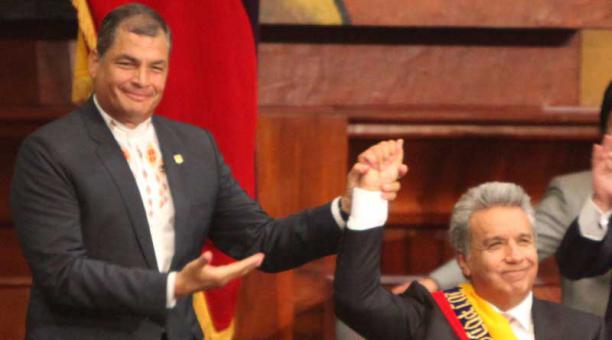 The result of the referendum and popular referendum on Sunday in Ecuador was announced on Monday, February 5, 2018, in the media of the United States, Europe and Latin America. With 99% of the minutes tabulated, the quick count of the National Electoral Council shows the triumph of the yes in the seven questions.

“The result moves the Ecuadorian electoral system away from those of neighbors like Venezuela and Bolivia, where leftist leaders Evo Morales and Nicolás Maduro have entrenched themselves in power while still holding elections,” the New York Times of the United States published on Monday. “On the other hand, Ecuador’s system is close to that of Colombia, which limits presidents to a single mandate of four years, and that of Peru, which allows re-election only if the terms are not consecutive,” he added.

On Sunday, February 4, more than 13 million Ecuadorians were summoned to the polls to pronounce on seven proposals of President Lenin Moreno. In five questions of the referendum, the political death due to corruption was raised; the elimination of indefinite reelection; the restructuring of the Council for Citizen Participation and Social Control; the imprescriptibility of sexual crimes against minors; and the restriction of metallic mining. In two questions of popular consultation, the repeal of the Goodwill Law and the expansion of the protected area in the Yasuní were addressed.

The newspaper El Tiempo de Colombia entitled: “Ecuadorians closed the way to a new re-election of Correa.” The note was published at midnight on February 4 on its web portal. The Colombian media pointed out that “the Ecuadorians buried this Sunday the possibilities for former President Rafael Correa could choose, at least for now, for a new presidential re-election in 2021.”

In Spain, where 176,000 Ecuadorians were eligible to vote, the newspaper El País said that the electoral process is a demand of Moreno in the Presidency. “But the referendum, which legitimizes him and opens the way to a stage of national consensus with the other political forces, was above all a way of telling Correa that his time was over,” the Spanish media reported.

The BBC World in Spanish opened its digital portal with the news of the elections in Ecuador. “The political end of Rafael Correa? What does the result of the referendum promoted by his successor, Lenin Moreno, mean for the former president of Ecuador?” The article analyzed the differences between Correa and the current President, who was his successor for the same political movement, but with whom

later a separation was evidenced.

Also, the BBC talks about what the percentage reflects for the yes (more than 60%) and for the no (around 30%). In addition, Correa stands out as the leader of the campaign against the consultation, especially in questions 2, 3 and 6, the last two on the Council of Citizen Participation and Social Control, and on the Law of Goodwill.

Another British media that reported receiving the consultation was The Guardian. He referred to the reactions of Correa and Moreno to the results. “Lenin Moreno, who was protected by Correa until assuming the position of president last year, praised the results as a triumph for Ecuador’s democracy, and Correa warned that they would usher in a new period of political instability.”

Le Monde, from France, titled ‘The Ecuadorians close the door on the return of Rafael Correa to power’ and wrote on his website on Monday: “A referendum was held on Sunday in Ecuador. 64.3% of voters approved the abolition of a law that allows the indefinite re-election of the president. ” Page 12, half Argentine with which Rafael Correa has shown approximation, also highlighted the impossibility of a new re-election of the former president after the consultation on Sunday.

For his part, Clarín, from Buenos Aires, titled: “Ecuador: strong rejection in a consultation to an eventual return of Correa to power.” And he wrote: “The result is a boost for Lenin Moreno, current head of state.” At 16:45 on Monday, February 5, 2018, the question regarding the elimination of indefinite reelection in Ecuador reached 64.37% for the Yes and 35.63% for the No. (I)