The Judiciary backs down with the appointment of 8 prosecutors; among them the brother of the President 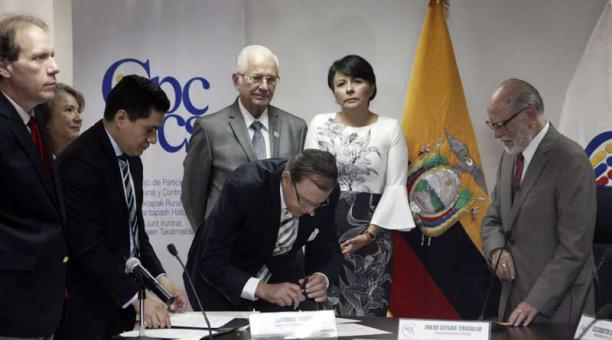 The Plenary Session of the Judiciary Council replaced eight of the 23 provincial prosecutors it had appointed last Friday. In this group is Guillermo Moreno, brother of the President of the Republic, Lenin Moreno, who was in charge of the Napo Prosecutor’s Office.

José Córdova will be in his place. The brother of the Chief Executive could not accept the appointment because he fails to comply with article 2 of the Judiciary Council resolution 002A-2018. This regulation prohibits entrusting prosecutors to those who occupied those positions in the period between 2016 and 2018.

Last night, the Judiciary Council issued resolution 005A-2018 in which it appointed the new prosecutors. In Guayas and Galápagos Edmundo Briones will work instead of René Astudillo. In the previous resolution, Briones was in charge of Santa Elena. He is the only prosecutor on the list who was relocated.

The others were replaced. In Carchi, Rosa Moina will serve in place of Manuel Guerrero. In Cañar, María Caguana will replace Jorge Vélez. Another change occurred in the province of Loja with the addition of Gina Gomez de la Torre to replace Gustavo Benitez. On the other hand, in Esmeraldas, Carlos Espinosa will no longer be appointed and Ximena de Lourdes Mora will be taken over.

Santa Elena will be led by Nelson Vela. The provincial prosecutor of El Oro will be Marco Ordeñana and no longer Luis Caivinagua. Finally, in Sucumbíos Fabian Salazar will no longer be Silvia Juma.

Among the prosecutors who would not take office are those who had observations within the Judiciary Council. The manner in which the appointment of prosecutors was given on Friday, the 22nd, is an issue that concerns the assembly members. The president of the Supervisory Commission, María José Carrión, sent an email to the rest of the table.

There she reported that Marcelo Merlo will be invited again, as head of the Judiciary. The call was officially released last night and the appointment is scheduled for 09:00 on Wednesday, July 4. In the previous invitation, on Tuesday, the president of the Judiciary Council excused himself from attending.

Legislators like Luis Pachala, of Creo, demand answers to know how the list of the 23 provincial prosecutors in charge was made. While this process closes, the Judiciary will focus on redistributing the servers to improve coverage in the country. Merlo said that the main problem is the burden of processes that each prosecutor has. “We are going to reassign prosecutors to get a balance.”

He gave as an example what happens in Manabí. In that province there are two prosecutors per 100 000 inhabitants, which at the discretion of the transitory official is “worrying”. Added to this is the need to have more staff.

Ecuador has 4.5 tax per 100,000 inhabitants, when it should be eight, according to Judiciary Council statistics. The counselors of the Judiciary will deal in the coming days with several pending issues from the previous administration.

Hernán Ulloa, lawyer of the judges dismissed under the figure of inexcusable error, met yesterday with the vocal Juan Pablo Albán to propose measures to restore his defendants in the positions. According to the jurist, the Judiciary Council could not apply that figure since he had no competence to do so. The concerns of Ulloa will be transferred to the Plenary in a future meeting of the Council. (I)

Fishermen asked in their day more security to work