The Judiciary is supervised by the Cpccs and the National Assembly 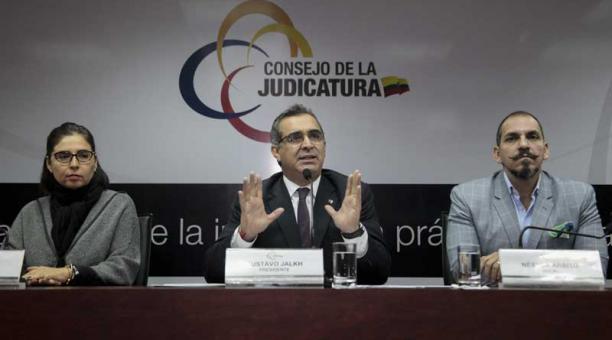 The Council of the Judiciary no longer faces only the evaluation of the Council of Citizen Participation (Cpccs) transitory. The request for impeachment against him was qualified by the Legislative Administration Council (CAL) and the process will begin in the next few days at the Supervisory Commission.

The table is scheduled to meet this Monday, May 14, 2018, to know the order. Although, until yesterday afternoon (May 8), the CAL had not sent the file. This Commission will be responsible for issuing a report recommending or not the interpellation in the Plenary.

María José Carrión, expects the notification to arrive between today and tomorrow (May 9 and 10), to convene the session. The members must know the process and collect the evidence of charge and discharge to prepare the approval or file report.

Carrión considers that there are doubts in the approach of the trial. For example, it is not known if the process is directed to the 10 members of the Judiciary, between principals and alternates, or only to the principals. It will also ask the proponents to specify if they will prosecute those who acted and voted in favor of the resolutions that motivated the trial or to all of them.

For the PSC legislator, Luis Fernando Torres, an individual process must be initiated for each member. He believes there are reports from the agency that could lead to the trial. But in case the Commission recommended the interpellation in the Plenary, at this moment, the votes for the sanction would be incomplete.

The PSC represents 16 wills. To this is added the Creo movement, which has 21 seats. For the legislator Patricio Donoso there are two key elements that compromise the operation of the Judiciary: the use of the figure of “inexcusable error” to sanction judges and a report from the Comptroller’s Office about the election of prosecutors in 2013.

The 15 seats of the BIN will also go for censorship. But the three political forces add 52 votes and 70 are needed, which could come from SUMA, Alianza País (AP) or Alfarista Revolution (exAP). The legislator Soledad Buendía, correísta, did not deny the possibility of supporting the trial. “Each case is different, therefore the political moments imply that the cases are objectively analyzed”.

The President of the Judiciary, Gustavo Jalkh, was Minister of Government and Secretary of former President Rafael Correa. Jalkh reacted this mars, May 8, before the qualification of the trial. For him, the legislators are in their right and he hopes that the process “is done with seriousness”. He said he feels calm about the decisions made.

In addition to the process in the Legislative, the Cpccs prepares a report on the fulfillment of functions of the Judiciary. If this is not favorable, they could cease the vowels. And, precisely, the Transitory Council received another accolade from the same Assembly, which approved a resolution in its favor.

After that, Julio César Trujillo, president of the Council, met with the legislative authorities to tell them about the progress of the evaluation. In addition, President Lenin Moreno had also given his support on Monday, May 7.

The discussion of the “most sensitive” articles of the process of selecting and appointing authorities continued on Tuesday, in a reserved manner, at Cpccs. The goal was to polish the document to be approved in the session on Wednesday.

Until the closing of this edition had not been achieved. And, according to counselor Xavier Zavala, the agenda for the meeting had not been defined either. One of the new features expected in the mandate is the greater role of social organizations in the appointment of authorities.

According to one of the proposals debated in the Council, the “veedores” and commissioners will be assigned to each selection process, in a random manner. They will be part of a technical committee, which could also be integrated by plenary delegates. This commission will prepare a recommendation report on the applicants of each contest.

But the Plenary will make the final decision and will monitor the transparency and fulfillment of requirements. Another of the topics under discussion was the form of nomination of candidates for the selection of authorities, such as the Prosecutor’s Office, the National Electoral Council, the Comptroller’s Office

One of the proposals is for the social and union organizations, endorsed by the Council, to present your candidates. But that, at the same time, any citizen can be nominated, with the support of other social organizations. In addition to the Executive’s support, Cpccs received the support of the Assembly that approved yesterday, Tuesday, May 8, with 91 votes, a resolution in its favor. To this is added the support that was made public yesterday by leaders of indigenous movements, including Conaie, Ecuarunari, Confeniae and Pachakutik. (I)