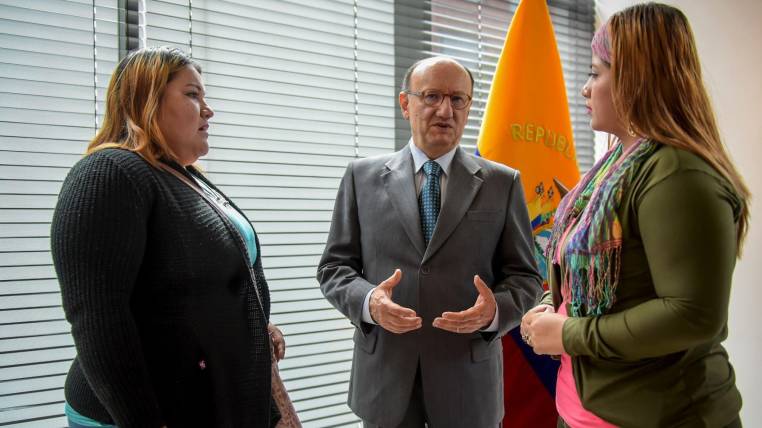 Walter Arizala, alias Guacho, leader of the narcoterrorist front Óliver Sinisterra, felt the ability to seat Lenin Moreno himself at his negotiating table.

This is evidenced by one of the last WhatsApp chats that he exchanged with the police Major Alejandro Zaldumbide, ex-manager of the Logistics Management of the San Lorenzo Surveillance District, in Esmeraldas.

When Guacho sends a message of 00573158607637, Zaldumbide tries to reassure things. It was 13:02 on April 15, two days after the president announced that Javier Ortega, Paul Rivas and Efraín Segarra, kidnapped by the dissident, had died.

The chat was registered in a part that Zaldumbide elevated to the deputy director of Intelligence. Among other things, the officer tries to calm the dissident by saying that the police, judges and prosecutors do their job. He communicates that the communication channel passes to “Dr. Maldonado”, who “will help you with your request”.

Arizala responds in 25 lines. Start with a greeting to “President Lenin Moreno and his cabinet of police and soldiers.” He tells him that they have two undercover agents withheld and he wants things to be done calmly and quickly. Apparently he was referring to Óscar Villacís and Kathy Velasco, kidnapped on April 12 in Puerto Rico, Colombia, a fact that was announced eight days later.

And if President Lenin Moreno gave 12 hours for a proof of life of the El Comercio group, Guacho gave the same time “so that the prisoners we have in his country he will give them to us and we will give them to the two detainees.”

The message continues asking that the president “not risk his soldiers, police, agents and not put his country in the middle”.

He speaks of ideals and that the war comes from unemployment, inequality, hunger and the total abandonment of governments towards the peasants. He demands solutions with a focus on each peasant, community and neighborhood creating jobs, helping the needy.

“The last decision is taken by you, President Lenín Moreno, peace or war for your entire country.” He tells him about his nephew being held in an operation performed in Mataje on April 13. “Do the favor and let him go because he has nothing to do with this problem or each of your Ecuadorian citizens will pay the price for my nephew.” In the file that investigates the attack on the barracks of San Lorenzo no more chats are listed.

In Ecuador, almost fifty collaborators of Guacho were arrested. And Colombia was not left behind, because its Ministry of Defense announced that 40 people who were part of the structure of alias Guacho have been captured or dismissed by the military and police of that country. Among the captured is Alonso 25 and among the deceased, alias Costeño. Alias Alonso 25 had an arrest warrant for illegal possession of weapons, a conspiracy to commit a crime with terrorism and rebellion and was accused of the crime of two policemen.

Colombian Defense Minister Luis Carlos Villegas also offered that “the culprits of the murders of Ecuadorian journalists must be sought between the criminal structure of alias Guacho and its members. We are looking for corpses with our most competent canine units, “he added. On June 12 Guacho and 21 suspects will be linked by the attack on the police barracks.

Today at 09:00 the Attorney General Paúl Pérez Reina inaugurates the Specialized Unit for Investigation against Transnational Organized Crime (Unidot). Six prosecutors will take charge of the macrocrime cases that are committed throughout the country.

The cases registered in the northern border open to investigate alias Guacho and his collaborators are among the first to assume the unit. They are for trafficking in arms, drugs and precursors, terrorism, organized crime, among other crimes.

Walther Patricio Arizala, alias Guacho, whom in his beginnings neither Colombia nor Ecuador recognized as his citizen, in fact he is Ecuadorian, of Limones, San Lorenzo. He was born on November 9, 1989 and registered on September 10, 1992. (I)