For Jhonny Zambrano, a Manabi producer, not only the mealybug, the thrips (pests) and the annoying parakeets cause a headache in the process of planting pitahaya. In recent months, to this accumulation of inconveniences has been added another that annihilates the profitability that once fell in love with this crop: the collapse of prices from $ 9 to $ 1 or $ 0.80 per kilo. 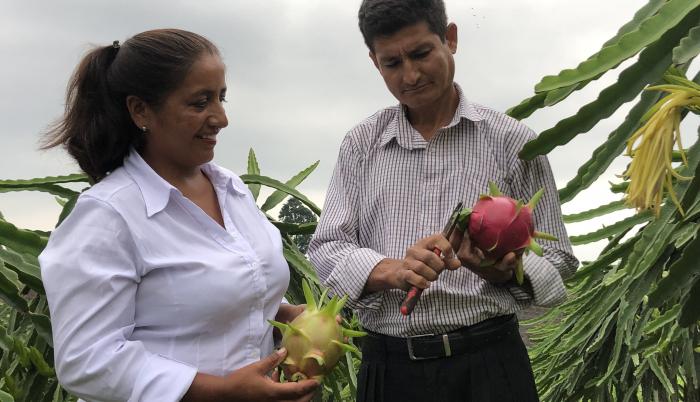 Armida Carvajal points out that in Los Ríos, the value per kilo has decreased between 60% and 70%.

Under an inclement sun, and surrounded by at least 4 hectares planted with fruit, the Manabí landowner walks through the area located in the Mina de Oro site, in the Rocafuerte canton, Manabí province. There, remember, in 2019 the dream of being part of the world that produces this appetizing and multifunctional fruit was born. He did it with 100 plants, then with a hectare and a half and now it is already exceeding 4. However, the income is not the same as before. After the arrival of the pandemic and its effects on commercial logistics, they have ended up hitting a sector, which today demands greater attention from the Government to regulate prices.

The lowest pay is given in the two types of pitahayas that are produced in the country, the red and the yellow. The problem is also felt in the Ventanas canton, in Los Ríos. In less than two months, Armida Carvajal points out, the value fell from $ 2.70 to $ 1.00 and $ 1.25 per kilo. This was realized after the arrival of the invoices from the importer that markets its production in markets such as the United States and China. “If these prices are maintained, it will no longer be profitable to continue in this crop,” he mentioned.

That expectation worsens among farmers in Palora (Amazon), where at least 70% of the fruit is grown. Estalin Tzamarenda, leader of the Association of Pitahayeros of the Palora canton, mentions that this problem will not end if the State does not intervene by formalizing the sector and setting an official price for the fruit. Although he recognizes that this is not a panacea (because the market does not always respect them), it would avoid that prices at least do not go to the ground, as now.

He still remembers with nostalgia the $ 9 that four years ago the market came to pay for each kilo. They were boom times that, he acknowledges, will hardly be repeated. The urgency now, he says, is to get prices to recover so as to at least be able to cover production costs. “They are paying $ 1 per kilo, but to produce that minimum kilo you need to spend $ 0.90. It cannot be said that there is no demand, there is demand, but at least they should pay us something more to be useful. At least 2 dollars or 2.50 per kilo, but they don’t do it because here the business is run by intermediaries who pay according to their interests”.

The situation led Tzamarenda and other farmers in the Amazon, where yellow dragon fruit is grown, to set foot in Guayaquil to protest on its streets. They arrived on November 12, with posters in their hands to ask the authorities to design a route that would take them out of the crisis and lead them to growth.

On the marketing side, the problem of low prices is attributed to an overproduction of fruit, which could worsen in the coming months, when the sector enters the peak of its harvest from January. “The one that has the most problems is the yellow dragon fruit. The reality is that since there is a lot of supply and the country has quite limited destination markets, the values ​​are low, ”says Luis Ponce, general manager of Social Deal, a firm that expects to close 2021 with 1,200 tons sold.

Ponce talks about the dependence on the United States, a country that is taking 80% of the fruit, both red and yellow. “Even if it is a large market, it reaches a limit. There are times of the year when with so much fruit there is an oversupply in the American market. When that happens, prices fall”. Other markets that purchase pitahaya, but in small quantities, are Canada, Hong Kong, Singapore, Malaysia and certain European countries.

At the national level there is an average of 850 hectares with an annual production of 29,750,000 kg. In Pastaza there are about 70 producers, but Palora is considered the capital of the pitahaya, there the farmers exceed 1,000. But they are grouped into nascent guilds, which still do not have a correct organization. Hence, one of the pending issues, Ponce admits, is to start working on the formality of the sector, so that it can access other markets.

In this Tzamarenda agrees, Asian markets such as China, Japan and Korea are the ones with the highest demand; However, they recognize the limitation that the sector has to comply with the phytosanitary norms and other demanding rules that are imposed, such as the control of fruit flies, the use of certain chemicals or the records and controls in the collection centers.

Zambrano notes that it is not the only problem. Another pending, he says, is to invest in research, not only to access plants that are more resistant to pests, but also to take advantage of the fruit. He believes that in order to take advantage of a type B pitahaya, considered the rejection type, research spaces should be promoted to give it added value.

Pedro Peñafiel, MAG projection and technological innovation technician, acknowledges that in the pitahaya sector there is still much to do. The first pending, he says, is to formalize the sector, at the first level of organizations to keep track of what is grown and marketed. The second is to set fixed prices.

Being a relatively new crop, he says, it has organizations that are still weak and that represent small towns. The approach of a change, he adds, must arise on the own initiative of the partners and producers . “They need a great organization that fights for their rights,” he said.

The MAG technician clarifies that the issue of low prices is not a constant, since there are high values ​​in the months of June to November when production begins. However, these values ​​have been declining over time, due to the lack of control in intermediation. AG