The matches, with changed foot 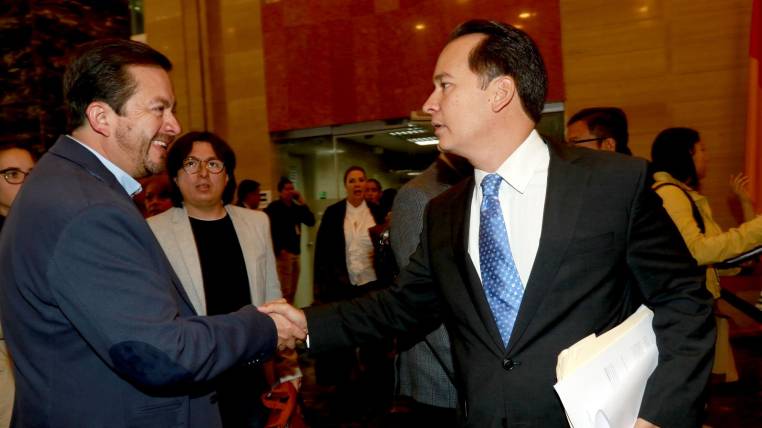 The shock wave reached almost everyone. Although the expectation was that the political organizations, which share a similar trend, will be strengthened by the crisis that affects Alianza PAIS after the rupture between “correístas” and “morenistas”, the reality is that they also mounted a spiral of disagreements and accusations

The National Assembly has become the evident scenario of this struggle that involves the main political forces of the country. The center right represented by the movement Creating Opportunities (CREO) and the Social Christian Party (PSC) exchanged, for two weeks, accusations of having agreed with the correístas, the ones, and with the Morenistas, the others. The denunciations of pacts under the table returned to the speech.

The rupture came before the Christian Social decision not to give way to the direct dismissal of José Serrano from the presidency of the Assembly, as was the claim of CREO and that found support in the legislators close to former President Rafael Correa. Although, finally agreed to vote for the dismissal of Serrano and the call for trial of prosecutor Carlos Baca Mancheno. CREO also remained alone in the voting for the election of the new president of the Legislative: they were the only ones who did not give their support to the ruling party Elizabeth Cabezas.

Between PAIS and its dissidents, the storm has not stopped either. They self-attribute the representation of the left. The accusation of the Green bench is that its former movement partners seek to generate ungovernability, at all costs, to provoke a Constituent Assembly, in the medium term.

Inside, political organizations also do not necessarily enjoy harmony and, in some cases, disagreements have come to light. The SUMA bench suffered the resignation of Assemblyman Héctor Yépez. On January 6, he abstained from voting for María Alejandra Vicuña as vice president and contravened the decision of the caucus. From there all relationship with the leadership of the movement was broken.

All this before a citizenship that, according to the latest Opinion Profiles survey, prepared at the end of February, in 77% does not sympathize with any political party. In the same month of 2017, only 45% said they had no sympathy for political organizations. For the political analyst Luis Verdesoto the current situation should not be surprising because, in his opinion, it is the continuation of the crisis of representativeness that the country was experiencing before 2006, when the figure of Rafael Correa and the self-proclaimed citizen’s revolution appeared.

“The authoritarianism of these ten years did not break or resolve the issue of representation crisis. What he did is take over the whole scenario and eliminate other forms that are now emerging with the same old theme and practices, “he told EXPRESO.

Another factor that would be unleashing these external and internal confrontations in political organizations is the proximity of the sectional elections. In Guayaquil, there were even verbal incidents between sympathizers of the former presidential candidate for the PSC, Cynthia Viteri and Deputy Mayor Doménica Tabacchi, both candidates for mayor of the Puerto Principal.

For the political consultant, Gustavo Isch, this apparent transition stage, which has been going on since President Lenin Moreno took office, would have taken the political parties more weakened than previously thought. “They were mined for almost 11 years by a strategy of discrediting that orchestrated the correísmo, but also by their own practices that do not connect with people and, apparently, want to maintain,” he said.

The challenge of recovering some of the empathy lost by the citizens is great for the political organizations one year after the sectional elections. Isch believes that, hardly, they will achieve it but that if the current attitude is maintained things could get worse.

For his part, Verdesoto believes that the attrition of the national parties will not necessarily reflect in the next electoral process, because they are local elections, but he agrees that if there are no changes, in the long run, the parties will feel the consequences at the polls.

Adjustments and alliances to the order of the day

The pro-government Alianza PAIS movement will make a total restructuring of the provincial directives until mid-May. With this he hopes to start with the work in territory and overcome the current crisis.

The resolutions were taken at the Carondelet palace, in a meeting chaired by the leader of the movement, Lenin Moreno. They also defined some conditions that their local leaders should meet.

On the other side, the correístas are still waiting for a response from the National Electoral Council for the registration of their Alfarista Revolution movement. In the opposition, movements like CREO bet on the formula of the alliances that they used in past elections. Two weeks ago, the Christian Democracy joined the ranks, starting with former President Osvaldo Hurtado. The goal is to attract young people. (I)