Magdalena Tsuink, an indigenous Shuar from the Warints community, displays a series of artisan products, such as colorful necklaces and clay thermoses made by the women of her community. Magdalena held her exhibition at one of the stands of the XIII Expominas Energy Mega Event and XXI Expo Ecuador Oil & Power 2021 , which takes place, from today until November 26, at the Metropolitan Convention Center of Quito. 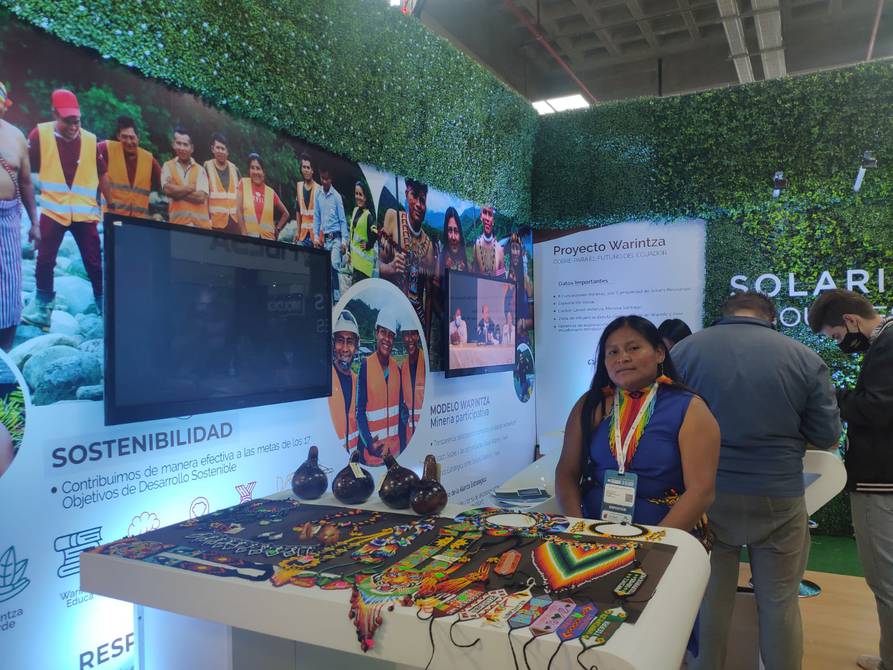 She explained that these crafts are the product of the training they have received from the Lowell mining company, a subsidiary of Solaris. The company carries out the Warintza mining project in Morona Santiago. ” We have had a Lowell training and our mothers have made these handles of beads, necklaces for men, for women, wallets, ” he assures.

Cecilia Tempam, from Azuay, can be spotted in another of the stalls at the fair . She is a representative of twelve communities of entrepreneurial women in that province , who have also received training to carry out ventures sponsored by Dundee Precious Metals (DPN) , a company that has bought shares in INV Metal and now manages the Loma Larga project. Cecilia explains that all the members (the majority, heads of household due to migration) have been able to carry out a series of projects, such as the production of shampoos, chocolates, preserves, horchatas, creams, which are gradually placed in commercial premises and sold at fairs.

Both projects are proof of the social responsibility of mining companies. Precisely the issue of social responsibility was dealt with in one of the seven panels of the event organized by HJ Becdach, which expects to receive 5,000 visitors and have the participation of 230 national and international companies, and give 70 keynotes and hold 4 round tables in these event days .

During the morning the panel “Environmentally and socially responsible mining” was held. José López, Responsibility Manager of Solgold, which manages, among other projects, one of the most important, which is Cascabel , commented that at least 16 agro-productive projects are being carried out, among which he named projects with free-range chickens and pigs, nurseries of plants and seeds, hibiscus flower production, among others.

Meanwhile, the Warintza project , managed by Lowell and Solaris, points out that it maintains several programs with the community, as part of its strategic alliance. This is how the programs are:

The company said that as direct impacts on the community they have 453 direct collaborators. Of these, 409, representing 90%, come from the Amazon, and 42.60% from the Warints and Yawi communities. The company indirectly generates 526 jobs, through its contractors, of which 309 people come from the Limón Indanza canton.

Meanwhile, Santiago Chamorro, from the National Mining Company (Enami) , mentioned that the entity does not have many resources to carry out social responsibility projects.

However, he said that his partners – who have better financial muscle – have worked in this field. Additionally, he mentioned that the public company seeks the well-being of the communities by providing services that the State itself can provide, and gave as an example the identification of remote sectors. He also remarked that they always apply good labor and environmental practices.

Tonight will be the opening, and during the three days of the exhibition various topics will be addressed: “Strategies to increase oil production in Ecuador.” “A successful model of relationship with the communities.” “Current and future situation of mining projects in Ecuador”. “Productive chain”. “Production and projects in the oil sector”. “Environmentally and socially responsible mining.” “Project Warintza, copper for the future of Ecuador”. (I)