The most familiar corruption 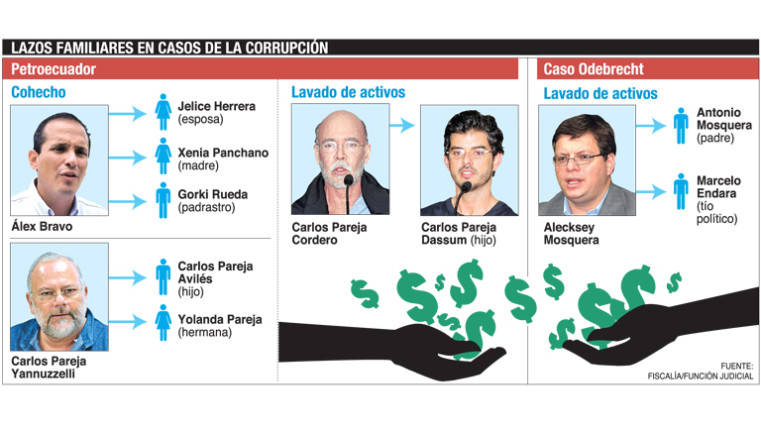 At least three research cases involve relatives. Fathers, mothers, children, and siblings have been prosecuted for bribery, laundering, and illicit association. There are at least two common features in the cases of corruption in the country: these involve the so-called ’emblematic state works’ of the citizens’ revolution and the existence of ‘family networks.’
The last one involved was Antonio Mosquera, the father of former Electricity Minister Alecksey Mosquera, who was investigated for alleged money laundering in the Odebrecht case. His linking took place on Tuesday. Due to his advanced age, he was sentenced to house arrest.

The suspicion of allegedly having received one million dollars in 2008  for the Toachi Piltaton project weighs on the former minister. He named his father as a shareholder of two companies, Truenergy and Autorush, that received transfers stemming from the alleged bribes. His uncle-in-law Marcelo Endara was the owner of another company. He said that Mosquera asked him to use his name to establish a business. The reason? In 2008 he was a minister and did not want to appear as a legal representative of any company.

But this is not the only case. Those involved in alleged crimes at Petroecuador also relied on their closest relatives. The former Manager of the state oil company Petroecuador Álex Bravo, sentenced by bribery, did so, as well as the former Minister of Hydrocarbons Carlos Pareja.
What role did these relatives play? The establishment of companies used for the reception of alleged bribes. In some cases, Endara claimed that his name was used without his consent.
Another familiar plot under investigation is the one of Ricardo Rivera, uncle of Vice President Jorge Glas. According to the Prosecutor’s Office, “taking advantage of his relationship with a public official he would have received payments to benefit the company so he can get government procurement.” (I)

Ecuador is ranked 55th in the Social Progress Index 2017