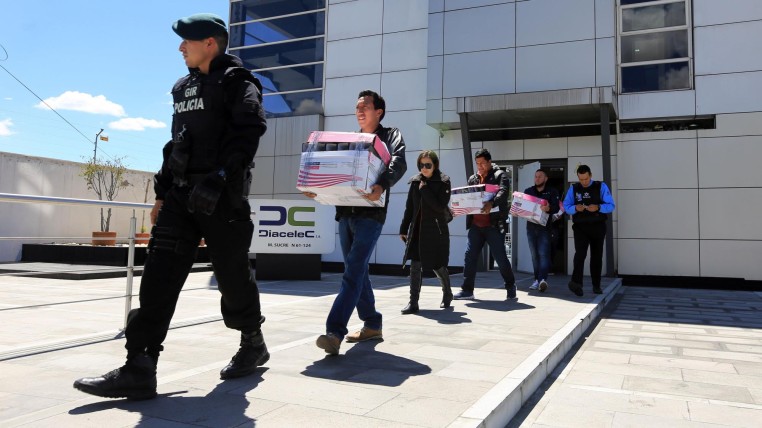 Four ministers and two secretaries of state. They all belong to the strategic sectors.

Jorge Marun, who was in charge of the Ministry of Public Works at the beginning of Correa´s government, awarded the Brazilians the construction of the Tena airport (for $ 34 million) under direct invitation, thanks to one of the many emergency decrees made by Correa.

Former Minister of Hydrocarbons Pedro Merizalde, who resigned six years after remaining in the oil high spheres as one of the victims of the Panama Papers, signed a $ 299 million contract with Odebrecht when he was in charge of the Pacific Refinery. The company was one of the 14 bidders, but got the near perfect score of 99.7 out of 100, under public accusations of “favoritism,” alerted by its competitors.

Close to the process is Energy Minister Esteban Albornoz, who is currently a legislator of the ruling party, under whose administration two contracts were signed for the initial amount of $ 142 million, through the Electric Corporation: Pucará and Manduriacu. Both, in the sights of the Anti-Corruption Civic Commission, were signed by Victor Hugo Jácome, a middle-level official, and the manager of the Celec Eduardo Barredo. The Pucará process also avoided the public tender under the modality of direct bidding and in the case of Manduriacu, Odebrecht was the only bidder.

The case was re-committed today by Alecksey Mosquera (now under arrest), former Minister of Energy, accused by prosecutors of receiving a million dollars in bribes (described by former president Correa as “a private agreement”) for the contract signed by Governor of Pichincha Gustavo Baroja to build the Toachi Pilatón project. Of the list, Mosquera has been the only one required by the Justice for investigations.

The Water Secretariat, in charge of Walter Solis, who was then Minister of Public Works, also awarded a $ 260 million contract to the Brazilian company, also by direct invitation. The process was led by Carlos Villamarín, a lower-ranking official who handled the internal commission of bids and who has been detained since last Friday.

Marco Calvopiña, detained for being part of a network of corruption rooted in Petroecuador, paid $ 370 million to Marcelo Odebrecht’s company for the construction of the Pascuales-Cuenca pipeline. And Bismark Andrade, who in 2013 awarded $ 222 million to La Esperanza project in favor of Odebrecht, one of the six companies that bided for the project, but the only one that, according to internal reports, “complied” with all requirements. The only one strangely.

The General Manager of Strategic Ecuador Pablo Ortiz Hidalgo completes the circuit with one of the last works awarded to the Brazilians, the Manduriacu roads, in 2014, for $ 26 million.

The political opposition and the minorities consider that the explanations of the politicians would contribute to the clarification of a tangled case, in the core of the ruling party Alianza PAIS, which bets on seeking information as it had denied so far (I).