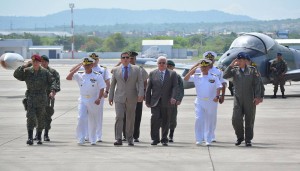 Amid a ‘tense’ moment between the Government and the Armed Forces, President Rafael Correa today took part in the ceremony of change of leadership of the head of the Joint Command (Comaco) and commanders of the Land Force, Air Force and Navy.

Until yesterday morning, the military did not expect the president’s presence at the event, to be held at the Eloy Alfaro Military School, in northwest Quito. An internal document that came to the light “repealed the request of a helicopter flight line performance;” but in the afternoon the Ministry of Communication confirmed Correa´s attendance.

The renewed military high command takes the helm after Correa’s decision to dismiss the previous one, whose members questioned his decision to debit $ 41 million to the Institute of Social Security of the Armed Forces (ISSFA), for an alleged overpayment of the Ministry of Environment in the purchase of 220 hectares of land where the Samanes Park is currently located, in Guayaquil. (I)