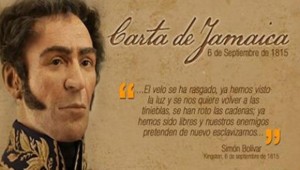 Ecuador confirmed on Wednesday the discovery of the original manuscript in Spanish of the Jamaica letter of September 6, 1815. The long letter was located in a historical archive of the Ministry of Culture, is one of the most famous letters of Simon Bolivar, of which only an English version was known.

“We have recent information of the finding in Ecuadorian dependencies of a manuscript of the Letter of Jamaica of 1815, prepared by the Secretary of Simon Bolivar (Pedro Briceño Méndez), in Spanish”, said the Foreign Minister Ricardo Patiño at a news conference.

The president of Venezuela, Nicolas Maduro, also informed of the find. Venezuelan experts traveled to Ecuador and confirmed that it is an original manuscript of the time.

The text contains a number of libertarian ideas of the Venezuelan hero, and his call for the integration of the American states which at that time were fighting for their final independence from Spain.