The Pacific Alliance challenges Ecuador to be more open 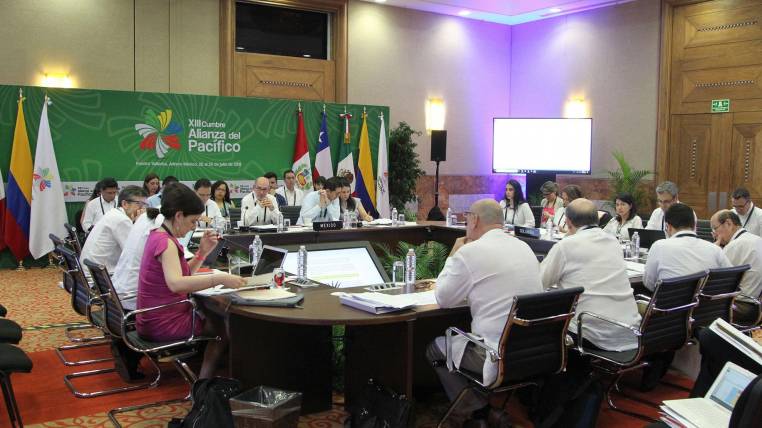 Since yesterday, an Ecuadorian delegation made up of government officials and businessmen are in Puerto Vallarta (Mexico) to participate in the Pacific Alliance Summit.

The group headed by Pablo Campana, Minister of Foreign Trade, has the goal of expressing to its peers in Mexico, Colombia, Peru and Chile the formal intention of joining the block as an Associated State.

Campana, according to the Ministry of Foreign Trade, will seek to explain at the Summit why Ecuador wants to join the group of nations.

An associated country has commercial and not political openness. Becoming a full member can take years, Campana said in days gone by.

Currently, Ecuador has the status of observer country of the Pacific Alliance along with 54 other nations.

But, what are the steps that Ecuador must follow to become an associated State of the commercial block?

The first obstacle that Ecuador will have to overcome is to sign a commercial treaty with Mexico. With Colombia, Peru and Chile it already has commercial agreements and that gives the country an advantage.

The procedure to be an associated country, according to a document of the Pacific Alliance, begins when the block invites the nation or the nation requests to be part.

The country must send a written request to the Pro Tempore presidency of the Pacific Alliance in which it indicates its interest.

The request will be submitted to the members for consideration to be examined and their acceptance determined. If accepted, negotiations will begin with the invited or requesting State through the presentation of the terms of reference of the negotiation and the calendar.

Negotiations will be held between the Ministers of Foreign Affairs and will be in the short term, although exact dates are not specified.

At the moment, Australia, Canada, New Zealand and Singapore are in the process of joining as partner countries.

Mongilardi argues that the main thing is for the country to remove the non-tariff barriers that impede the commercial flow.

The entrepreneur said that most local products should not have tariffs. At least 94% of the total must have free commercial circulation without any hindrance.

“You cannot have a list of 50% sensitive products,” he said.

The opening has a cost

Luis Schmidt, former president of the Federation of Fruit Producers (Fedefruta) of Chile and current ambassador of that country in China, told EXPRESO that Ecuador must lose the fear of the commercial opening implied by the Pacific Alliance.

Schmidt pointed out that Chile, decades ago, was also afraid of commercial opening at first.

The diplomat explained that the opening made many companies not survive due to low competitiveness.

However, those that were able to compete “did it with flying colors, there is a period of adjustment and it has a cost, but all that is compensated”. Without competition, companies do not develop.

Roberto Aspiazu, director of the Ecuadorian Business Committee, is one of the entrepreneurs who traveled to Mexico. He noted that it is obvious that some local products will require some protection in the short term and that may be part of the negotiations with the Pacific Alliance. The objective of the Ecuadorian mission will be to have a first approach with the block.

It would not favor the country

David Molina, executive director of the Chamber of the Ecuadorian Automotive Industry believes that a study should be conducted on what the impact of a free trade agreement with Mexico would be. In a previous analysis carried out by his sector, he said that an agreement would enlarge the negative trade balance with the North American country. (I)

Groups deleted from the electoral register now ask to return