The painful journey of Ecuadorians through the Darien jungle

According to the National Migration Service of Panama, 15,185 compatriots crossed this dangerous route between January and October 2022. Not all of them reach the United States, some advance to Costa Rica. 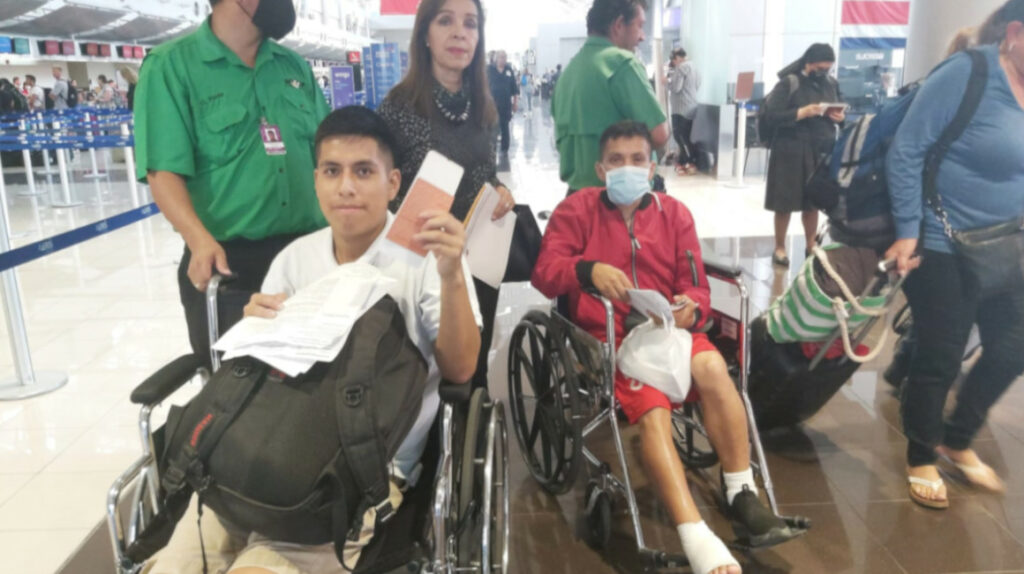 Two Ecuadorians return to the country on November 15, 2022, after crossing the Darien jungle.

Jack Chup never imagined becoming another migrant and going through the bitter experience he lived in the Darien jungle, the natural border between Colombia and Panama.

His journey began on October 9, 2022, when his older brother, Henry, told him that a friend in the United States had a job for them, according to his cousin Fabian.

Henry, 29, and Jack, 20, lived with their parents in a Shuar community of Tiwintza, Morona Santiago province, where they drove backhoe loaders on construction sites in the Amazon.

That day they said at home that they were going to Coca , in Orellana , for a job. “Just heading to Macas, Henry tells his brother to go to the United States. They left on their own, without coyoteros”, says Fabián.

After several days of crossing, with cans of tuna as their only food, the brothers arrived in Colombia, where they each paid USD 250 to cross into the Darién.

Once there, Jack wanted to rest, but his brother insisted on crossing the river to the next community, as two Venezuelan citizens had done, holding on to a rope.

Despite his younger brother’s insistence, Henry crossed the rushing river and fell before reaching the other bank. Desperate, Jack tried to help him, but the current carried him away. After all this, nine days had passed since they left Ecuador.

Henry had in a backpack the money he planned to pay to go to the United States.

With anguish and not knowing what to do, Jack saw some boats arrive . It was the night of October 18, 2022. In those boats, the migrants crossed the river.

There, the young man reported the disappearance of his brother. However, there was nothing they could do because of the darkness of the night. Already on the morning of October 19, Jack and another group of migrants embarked on the boats, without news of his brother.

“Jack told us that as he was crossing the river, he looked down hoping to find Henry, and what he saw was countless corpses of others who drowned trying ,” Fabian adds.

Once on land, the military received the foreigners. Jack notified them of his brother’s disappearance and one of the uniforms took out his cell phone to show him photos of the bodies in the river, in case he could identify Henry. Only then did he find his corpse.

That is the way they identify the bodies and those who are not recognized continue to swim in Panamanian waters.

The rescue and transfer of Henry’s body to the Darién morgue began immediately. “The military offered Jack to cremate the body and take the ashes with him, but Jack did not accept and continued on his way to Costa Rica.”

Once on Costa Rican soil, the young Shuar made contact with some coyoteros who asked him for money to cross over to Mexico. But penniless and overwhelmed, Jack called his sister De él July, who lives in Cuenca, for help.

It was only then that the Chup Najabde family found out what had really happened to the brothers.

“Jack told us that he had a bad feeling about the coyoteros . They wanted to put him in a black vehicle, while the rest of the migrants went to a van,” Fabián said.

The Ecuadorian followed his instinct and with the excuse that he was going to the bathroom, he escaped. Finally, he managed to reach the Consulate in Costa Rica and resumed communication with his family, with the firm intention of returning to the country.

According to Fabian, no one in the family -not even Jack himself- knew that friend of Henry’s, in the United States.

The Consulate helped him with a safe conduct, but the family paid the cost of Jack’s return ticket to Ecuador. One month after what happened, they are still waiting to be able to repatriate Henry’s body and with expenses that exceed USD 2,000.

He hurt his foot and the dream ended

Víctor Caizalitín, another Ecuadorian who crossed the Darién, caught his breath when he managed to reach Costa Rica, after a journey that lasted 20 days since he left Quito with the dream of reaching the United States.

The idea of ​​emigrating to North America was born in mid-October 2022, at a lunch with his friends Luis Calderón, Jaime Chicaiza and Jason Quingalombo.

Víctor was desperate because his hairdresser, located in Cotocollao, a northwestern parish of Quito, was not going through a good financial moment, so he listened attentively to his colleagues. The problem is that none of them had a passport to leave the country.

Luis told them that his cousin crossed the Darién and managed to reach the United States by crossing the border irregularly from Mexico.

The only thing they needed was their identity card, so the relative was in charge of sending them the coordinates via WhatsApp from New York.

Víctor asked his relatives for a loan of USD 2,500 and put together a backpack with a few clothes and groceries. He then said goodbye to his wife and his three daughters and traveled with his friends to Rumichaca, the border between Ecuador and Colombia.

Then they embarked for the Colombian city of Medellín to later arrive at the municipality of Necoclí, in the department of Antioquia.

From there they crossed the Caribbean by boat to Panama, paying USD 230 each. At last, they had before their eyes the Darién Gap, an inhospitable and jungle territory located between Colombia and Panama.

On the site, there are groups of Colombians, Panamanians and Venezuelans who have turned irregular migration into their business.

Victor and his friends were charged USD 190 per person to guide them through the humid jungle full of rivers, swamps, wild animals and criminals.

After paying the “toll”, the “guides” gave them green bracelets and joined a platoon of 250 people, made up of Haitians and Colombians.

There are other groups with blue, red, pink bracelets waiting their turn to start an adventure that can last up to 10 days.

The four Ecuadorians entered the jungle, where the annual temperature fluctuates between 25 and 26 degrees Celsius. To cross the Darién you have to go through four camps separated by at least 15 hours of brisk walking.

The first is known as the Las Banderas camp , says Víctor. “There are all the flags of South America, including Ecuador’s,” he explains.

There, a coffee in water and a plate with seco de pollo and a small garnish of rice cost USD 7. A bottle of water, USD 3.

After a tense break, the compatriots resumed their journey to the second refuge, armed with sticks so as not to slip down the mountain. Suddenly, criminals armed with machetes intercepted them to rob them.

“Since we were 250 men and the Haitians were huge, the thieves got lost in the trees and did not attack us,” Víctor told PRIMICIAS by telephone from San José , Costa Rica.

Although two suitcases were stolen from them in one of the shelters, while they slept knocked out by exhaustion.

In every nameless jungle spot there were old clothes, backpacks, garbage, pain. Hungry women with their babies in their arms asked for help and Víctor condoled by giving them cans of tuna, biscuits and water, the only thing that serves to survive.

When crossing the last swamp, after passing through the refuge of the United Nations Organization, and ten minutes after arriving in Costa Rica, Víctor injured his right foot when he took off his boots full of water.

The pain was intense and Victor, who has diabetes, couldn’t handle the pain in his foot . He only managed to get to San José, where a taxi driver took him to the Social Security hospital to receive medical attention.

His friends waited for him for 48 hours, but they had to continue on their way. They have already arrived in Mexico. Victor was hospitalized for 11 days . He then went to the Ecuadorian Consulate in Costa Rica, where they helped him return to Ecuador by plane.

Will he try again? “No way. God brought me here and I got here ”, he promises, relieved.

Ecuadorians, the second most crossing the Darién

Almost 60,000 migrants of various nationalities crossed the dangerous Darien jungle between January and October 2022. This makes it the transit route most used by irregulars to reach the United States.

According to the National Migration Service of Panama, 15,185 of the 59,773 migrants who crossed this route are Ecuadorians . It is the second nationality that crossed the Darién the most this year, and represents 7.1% of the total.

Jacques Ramírez, a specialist in human mobility, shared information about the historic departure of compatriots. According to data from the INEC and the Ministry of Government that it collected, Ecuador exceeded 100,000 migrations to other countries, between 1992 and October 2022.

According to the Undersecretary of Migration of the Ministry of the Interior, 105,759 Ecuadorians left the country until October 2022, declaring their place of destination; 32,791 left 15 days ago and have not yet returned, and 19,884 left for studies, events and business.

The Foreign Ministry estimates 13,249 Ecuadorians deported in the last three years. Of this, 11,570 came from the United States.

As he pointed out, when a case is known, be it through the Consulate, by authorities of a country or by the citizens or family members themselves, the Protocol for protection processes for Ecuadorians in vulnerable conditions abroad is activated.

“The assisted return process begins with the receipt of the request, either in Ecuador or abroad. Once the state of vulnerability has been verified, a return ticket can be issued, solely and exclusively for cases of extreme necessity,” he explained to PRIMICIAS.

The protocol also contemplates an emergency temporary economic vulnerability assistance service abroad, to cover expenses such as lodging for a defined period of time, or delivery of personal hygiene items.

Previously, the entity performs an analysis of the economic conditions.

In Jack’s case, the Consulate managed a safe- conduct, because he did not have his identification documents, so that he can return to Ecuador. The young man did apply for a humanitarian flight, but the wait can be three months or more.

In the last three years, the ministry processed 25 assisted returns, nine of them between January and November 11, 2022.

Costa Rica has about 200,000 requests for political refuge, according to its president Rodrigo Chaves, who sent a letter to the United Nations coordinator to alert the situation.

The Foreign Ministry has also repatriated the remains of 80 compatriots who died abroad in the last three years, 51 of them from the United States. In 2022 alone, 21 Ecuadorians died in other countries, compared to 41 in 2021.

For these cases, the institution -through its Consulates or Zonal Directorates- accompanies the victims’ relatives in the procedures, which begin with the identification of the body. At this stage, most require DNA testing.

“The possibility of repatriation with public funds is analyzed and qualified on a case-by-case basis, in a formal process that is based on the socioeconomic criteria of the family,” he explained.

In this process are the parents of Henry Chup, to give the unexpected farewell to their son, who was about to turn 30 years old.