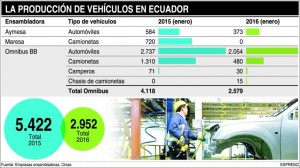 The production of cars in Ecuador started the year with the lowest number, which is a decrease by 46% compared to 2015. This is indication given by the statistics of the Chamber of Automotive Industry Ecuadorian (CINAE). Last year 5,422 vehicles were assembled, while in the first month of 2016, the number was 2,952.

Reduction in car production influences the temporary closure of the automotive company “Maresa”.

Other companies such as “Aymesa” and “Omnibus BB”, their assembly numbers have dropped from 36% to 37%, respectively.

Omnibus is the industry that maintains the market leadership (87%), followed by Aymesa (13%), according CINAE. (I)

The victims of the Spanish courier company must keep suing them