The photo of Spielberg with dead dinosaur left some ‘outraged’ 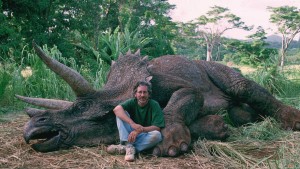 A photo of Film Director Steven Spielberg posing in front of a “dead dinosaur” caused the indignation of many internet viewers, who did not realize that the image had been taken two decades ago during the filming of the movie Jurassic Park.

The photograph was hung by comedian Jay Branscomb on his Facebook page as a joke with the following message: “Scandalous photo of a hunter who poses happy beside a Triceratops that he just killed. Please share so that the world can name and shame this despicable man”.

Apparently some viewers are not yet aware that the dinosaurs disappeared from the earth 65 million years ago.

Many expressed their outrage with Spielberg on Facebook for hunting dinosaurs, some calling him a “murderer of animals” and calling for a boycott to his films.

Others took the photography with more humor, which in just five days was shared by over 30,000 people.

From Los Angeles BBC journalist, Jaime Gonzalez, Jay Branscomb decided to publish the photo after a controversy broke out on Facebook after a young lady from Texas called Kendall Jones had posted on her profile on the social network, pictures appearing posing with various wild animals that she had killed during a safari in Zimbabwe.

Those pictures caused outrage among animal advocates and many viewers and Facebook decided to close the profile of Jones.