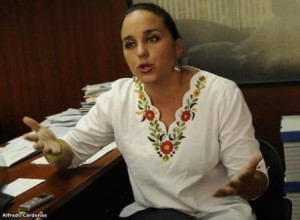 The publication of pictures and comments on the social networks of the new residence of the President of the National Assembly, Gabriela Rivadeneira (AP), in one of the valleys near Quito, made the authority clarify yesterday where she got the resources for the purchase.

Several Twitter and Facebook accounts indicated that her home would be valued at $ 380,000 and published a photograph of the main gate with security vehicles of the presidency of the legislature.

In response, Rivadeneira said:  “I, as thousands of Ecuadorian families and with two little children and thanks to the strengthening of the Bank of the Ecuadorian Institute of Social Security (Biess), I have been able to access to a mortgage to be paid in 15 years. We have had to come from Otavalo to the capital and have accessed this service, provided by the state through the Biess, and is a house in a residential complex, whose debt we will end up paying in 2028 with the fruit of our work and family sacrifice.”

She added that as a public worker, “all documentation is public and we are part of the new policy, in that sense we have nothing to hide.”
Furthermore, she made a call to users of social networks to serve with respect “as a communication tool among citizens and authorities and public workers.”

Correa to allies of PAIS movement: “The battle is all about communications …” to confront 2017 and 2019 elections