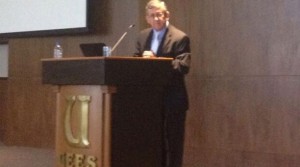 During the congress “Dollarization, 15 years later, a comprehensive vision,” organized since 19 to 22 January by the Espiritu Santo University (UEES for its Spanish acronym), the President of the Association of Private Banks César Robalino analyzed the evolution of the financial system in dollarization and gave his outlook for 2015 regarding the financial sector.

Robalino said that with a dollarized economy during 15 years, the private financial system is healthy, and against the bad omens of a difficult year for the fall in oil prices, “a banking crisis will not occur again.”

As an indicator of that good state of the banking system, he indicated that banking reserves in 2014 were twice above the unproductive portfolio, which “ended at $ 610 million and there are reservations for double, $ 1,200 roughly.” However, he emphasized that regarding the barrel of oil at prices below the estimated in the State Budget, there would be a slowdown in credit expansion.