The protest clings to the shout: do not shout the streets up 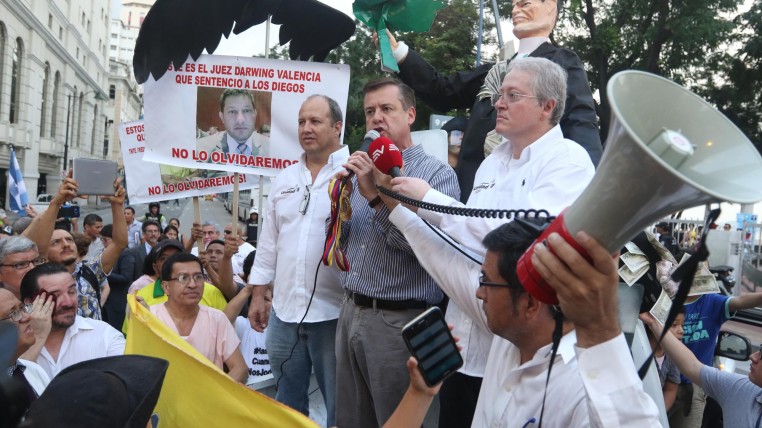 Citizens holding posters of complaint for health, education and public spending; politicians like Gilmar Gutierrez (PSP), who joined the electoral complaints, held in Guayaquil, or Andres Paez (CREO), who again criticized the tax reforms from the streets; cardboard puppets, that were snatched away last week by riot police, made their appearance once more, these insisted on caricaturing President Rafael Correa, this time accompanied by a couple of cops.

The protest held in the capital, however, made several stops. Dozens of demonstrators began their journey in the IESS and, despite the rain, walked towards the Constitutional Court. There, they attempted to put closure signs. “Shut down for inefficiency,” claimed those present.

The mission was not fulfilled. Police officers impeded the placement of the closure seal.

Before the impediment, members of social organizations walked to the National Assembly. There, they placed the symbolic closure warning. The mobilization ended with the promise to carry out more concentrations until the big event of May 1st.

After 17:00, at the Shyris Tribune, another group of citizens gathered to challenge the government. They decided to march to the Attorney´s office to demand the resignation of Galo Chiriboga.