The protocol against bullying, little known 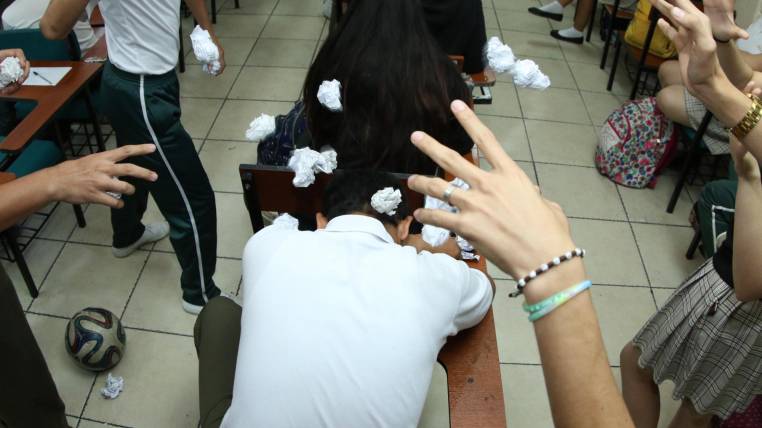 In May 2017, the Ministry of Education put into effect a protocol for action in situations of violence detected or committed in the education system. However, few teachers, students and parents know it.

The document was socialized to the members of the Department of Student Counseling (DECE) of each campus, composed mostly of psychologists; but these, apparently, forgot to share it with their educational community.

This is demonstrated by the responses collected by Diario EXPRESO to teachers, students and parents. Of 100 people consulted, less than half (30) said they knew the actions to be taken to avoid and prevent this problem. The rest indicated that they knew something because they saw it on the ministry website or because some neighbor commented on it.

The action protocol defines four steps (detection, intervention, referral and follow-up) as part of the activation route in case of suspicion or detection of a harassment situation. But each one is accompanied by other points that add up to a total of 15, which in many cases confuse those who are called to counteract bullying.

“Last year my son was beaten by some colleagues on several occasions. I denounced him at school, but they never told me there was a protocol to follow. My child did not know what to do either because in the school the teacher did not pay attention when he told him what happened, “says a mother of a fiscal entity, who said she went to the prosecutor’s office to complain.

But this would not be the route to follow, according to the protocol. In that case, the teacher had to report the aggression to the manager, call the parents of those involved and continue with the other established steps.

Carmen Morán, a public school teacher, does not know the protocol of action either. But she says that “by instinct” she knows that she must inform the campus manager of any irregularities he observes among her students.

The friends of Britany, the 11-year-old girl who died last week of a brain aneurysm, after receiving blows from her colleagues at a public school in Guayaquil, did not know what to do either when they saw that the child had been tied up and legs and covered the mouth to attack her.

During the 2017-2018 school year, 2,102 cases of ‘violence between peers’ were reported to the local education districts in the fiscal and private education units of Zone 8, which covers the cantons of Guayaquil, Durán and Samborondón. To this figure are added the 20 monthly reports that, for school violence, the Prosecutor’s Office receives.

The directors of several individual educational units come forward to defend the actions they are implementing against school violence. They point out that they have socialized the protocols.

In addition, in many of these camps talks, campaigns oriented values and extracurricular practices are developed, where the protagonists are the teachers, students and parents.

“There is no denying that bullying in the education sector exists, but it is everyone’s responsibility to work to avoid it,” says Patricia Ayala, rector of the Liceo Panamericano School

With her agrees Gladys Mejía, a private sector educator, who notes that in the campus where she works this topic is analyzed continuously. (I)