The PSC tries to strengthen out of Guayaquil 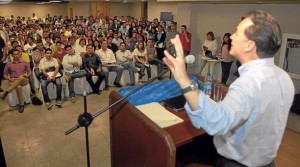 Affiliation sessions, training and meetings among members of the Christian Social Party (PSC) were activated from mid-year. With 217 000 members, this organization seeks to regain political space at national level, with a view to the elections of 2017.

Though it has branches in different provinces, their strength is the main port, where Leon Febres Cordero won local elections in 1992 and with the political group gained momentum, because eight years later, the same position (Mayor) is still hold by Jaime Nebot.

But the fact that Guayaquil is the almost exclusive bastion of the party, has played against. The need to expand into other territories originates in the last two presidential elections, in which the movement has not had a presidential candidate. In its 62 years of existence, the Social Christian party has had two presidents: Camilo Ponce Enríquez (1956-1960) and Leon Febres Cordero (1984-1988). Now, facing 2017 it analyzes a powerful candidacy.

The PSC bets on young people, every Saturday, since last August 29 in Guayaquil, dozens of young people are trained in the ‘Cantera of the 6,’ a platform commanded by novices of the organization