The psychologist who offers consultations on the bus 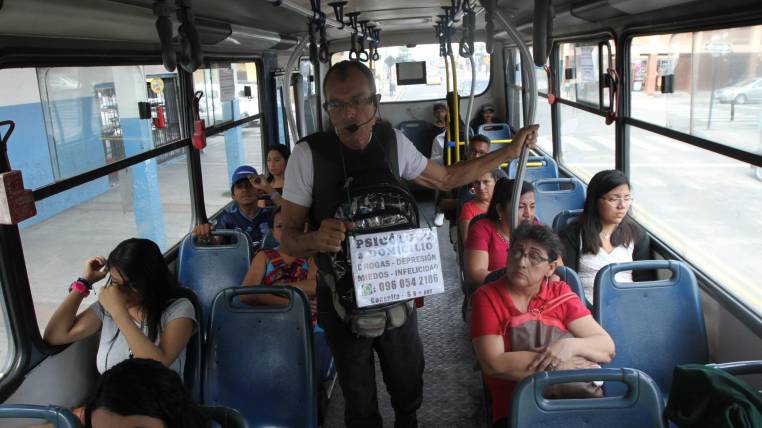 He is a psychologist. He obtained that title at age 24 and from there his career was only successful. Eleven published books, diverse and important positions in the area of education, such as the postgraduate direction of the University of Carabobo and six apartments that allowed him to live comfortably. Until a few years ago, Miguel Acosta was an older adult who believed that after four decades as a professor he would not work again in his life. However, he was wrong. Now he is a Venezuelan migrant who sells cookies. In his best time he earned $ 5,000 a month, but the crisis in the neighboring country caused not only that he lose 20 kilos in weight, but also that his retirement does not exceed $ 7 a month.

Interestingly, that was the same amount he earned in Ecuador in a single day. But this figure increased little by little from the day that a sign was placed on the chest in which he offered his services as a psychologist in exchange for an interesting value: “$ 6 + bus”.

But this story begins before, perhaps that day when overwhelmed by hunger decided to emigrate. He collected the $ 125 per person that cost the ticket and after several days of uncomfortable travel by car he arrived in Guayaquil with his wife and six-year-old daughter, leaving the others in Venezuela.

Confident that his extensive experience was going to be useful he went to university authorities. After all, during the Ecuadorian crisis he helped several of our compatriots who traveled to Venezuela to find work in the universities of that country. But six hundred résumés printed and delivered, without a call even asking for an interview to arrive. It was a colleague who explained the reason. According to him, he had arrived in the country very advanced in age.

“The same day I went to Bahia. I did like the mice and said ‘the cheese is over here, then over there’. I bought a bag of 20 cookies and sold them all on the first bus. ”

However, the idea of the psychological consultation on wheels began afterwards, specifically a month and a half ago. Daring to do so meant the rejection of many colleagues who pointed him to “bitching the profession”, but the need to feed his family was stronger.

The buses you take do not choose them at random, because you have even evaluated the schedules and lines that are most profitable. After an experiential ‘study’ and without resources, he concluded that there are eight lines that are useful to him. Each transport that goes up pays 15 cents. He knows that without that payment it is difficult for the driver to stop him the next time. In addition, he does it to avoid that by the speed of the driver when leaving he  falls. Four times it has already happened.

His exposure in front of the passengers is not improvised either. And is that in addition to cookies, provides a talk on various problems. The themes are prepared in advance; For example, yesterday he talked about depression and on Monday he will talk about the drug ‘H’.

In them, he advises users on the importance of listening and loving their children. The talk continues while a woman, who is sitting in the last seat, takes the initiative. Even though a small cross purse hinders her movement, she hugs her son and says “Even if you do not like kisses, I love you”. The little boy with honey eyes tries to get away, but the mother insists. After two attempts, he gives in and responds with a “I love you, mom”.

Although Miguel Acosta wears simple t-shirts and sneakers, his great wisdom is evident in every talk. It accompanies them with figures such as the number of Ecuadorian migrants or the destinations they took.

It also evokes moments or phrases from history, such as fragments of the love letters exchanged by the Venezuelan liberator Simón Bolívar with the Ecuadorian Manuelita Sáenz, to demonstrate the ties that both nations have maintained.

Finished the 15 minutes that last in average each one of its chats, he delivers the cookies. The phrase “Leave it alone” accompanied by a coin is the most repeated scene.

And before getting off the bus he promotes his services. Some, with suspicion, write down the number in a notebook; while others lose their shame and take a picture of the sign. Get off, walk to the return stop, look for 15 cents and the routine repeats.

At the end of the day and some questions he got, this Venezuelan keeps in his suitcase the money obtained with the hope of gathering enough for the rest of his children to come to Ecuador. (I)