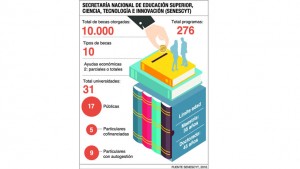 State funding for universities is viewed from different angles by the government itself.

President Rafael Correa warned he would reduce the allocation for two colleges: the Universidad Andina Simon Bolivar and the Latin American Faculty of Social Sciences (FLACSO). He also said that there will be a single scholarship fund, managed by the government, for institutions that co-financed by the State. The announcement came out of last Saturday.

While the Secretary of Higher Education, Science, Innovation and Technology, Rene Ramirez, said: assignments will not be reduced, but “these will be distributed more efficiently. A scholarship fund of 50 or 60 million dollars will be created.” He explained this to media in Guayaquil.