The state seizes barges and obtains compensation in trial 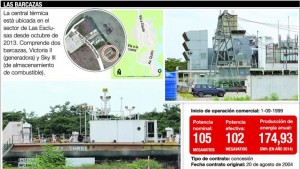 Barges Victoria II, of power generation, and Sky III, a fuel supplier, owned by the Intervisatrade SA company, are intervened by the state since December 24, 2014, by court order.

This private company had from August 20, 2004 a concession for 25 years for the generation and commercialization of electric energy, for which it used the barges.

Both units, stranded in the Las Esclusas sector, in Guayaquil, were seized by order of the Sixth Court of Criminal Guarantees, in a ruling issued last March 16, within a trial for an alleged tax-related offense filed in 2014 by the National Customs Service of Ecuador (Senae).

In its ruling, the Court declared Paul Ch. B. perpetrator of the crime of misuse of customs tax exemptions or suspensions, who worked as manager of the Intervisatrade company between 2001 and 2009.

Possible candidates are preparing for the race for the Presidency