The tariff increase for bananas will be progressive 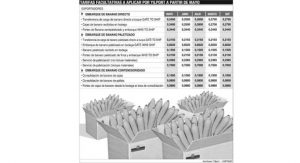 The increase in tariffs for cargo services in Puerto Bolívar (El Oro province) will be progressive. According to the new listing disseminated by the Yilport concessionaire among its customers and, the hike will start to take effect as of this month. The tariff rise is set from $ 0.13 to $ 0.24 per box to reach $ 0.28 in September.

The new rates, to which Daily Expreso had access, surprises marketers and exporters of the fruit who, after an agreement with the authorities on March 8, expected that this increase remains ineffectual.

They met last Wednesday with Yilport officials, and were informed of this new decision. “According to them, the resolution is approved, but it has not been socialized to date,” said Richard Salazar, manager of the Banana Marketing and Exports Association (Acorbanec), who until yesterday was awaiting a pronouncement from the Port Authority. “If there is still no resolution, they (Yilport) should not charge more than what is established. If there is such an increase, we will challenge it,” he said.

Food, vehicles, and clothing will be part of the EuroShow 2017