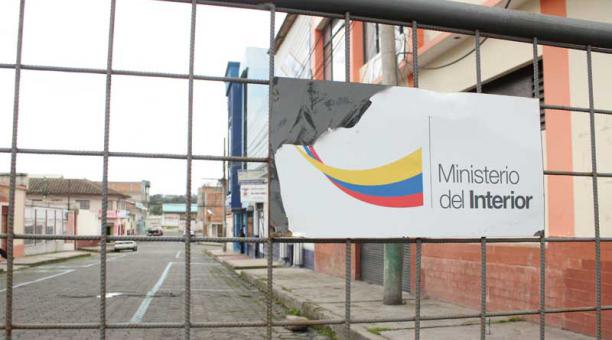 The message they left in the house of a judge in Esmeraldas said this: “You’re going to die.” Among the files that this judge had handled, there was one that involved a criminal organization and another related to drug traffickers.

That day, the official requested permanent security. But while he was assigned a policeman, he hired two guards to watch his house, because he says he did not feel safe either in court or at home. That same week he invested USD 2,500 in a security system with video cameras, and in an electric fence around his home.

It has been two years since he received that first threat and since then he maintains security, because his profile and that of his family are still high risk. Currently, four judges from the northern border receive police protection 24 hours a day. Two of them are in San Lorenzo, where a car bomb exploded in January 2018.

The fear among the judicial personnel operating on the border line is due to the violence unleashed on the border with Colombia. In fact, they have processed trials for terrorism, drug trafficking and chemical precursors used to make cocaine. In Esmeraldas, 59 magistrates work. Of them, some have received death threats this year. The Judiciary arranged a social worker and a psychologist to emotionally support the frightened officials. “It’s a constant fear. For two months I have not done anything but go to my house and work. I live with a policeman 24 hours a day. I have lost my privacy, “says a judge who receives protection in that province.

The Ministry of the Interior reports that throughout the northern border, 27 public officials have police protection. In that list are judges, mayors, politicians and directors of public institutions. Since the attack on the San Lorenzo police barracks, security devices have been installed in the judicial offices of the border cities, including security perimeters and bodyguards of the National Police.

In addition, they have video surveillance systems, metal arches, access controls, manual metal detectors, identification systems and specific security protocols for each unit that has been evaluated. In San Lorenzo, personnel of the GIR and the anti-explosive squadron inspect the judicial offices.

For two weeks, for example, the streets surrounding the Office of the Prosecutor of Tulcán are also closed with fences. So it remains 24 hours. Its authorities say that the measure is an action to prevent possible attacks. That agency activated the security protocols, in coordination with the Police.

Currently, in Carchi there are no prosecutors or judges with personal protection. In 2017, however, a prosecutor had to work with an escort. He recalls that he received threatening phone calls, demanding that he desist from investigating a drug trafficking case. They told him that if he insisted he would risk his integrity and that of his family. “Intelligence evaluated my risk and said it’s over.

But even now being a prosecutor at the border always generates insecurity and stress. ” Since 2017, the Council of the Judiciary has the ‘Individual Security Instructions for Judges and Prosecutors’. This guide determines in what cases and with what steps the security for officials should be increased. The protection of judicial units is also included. (I)