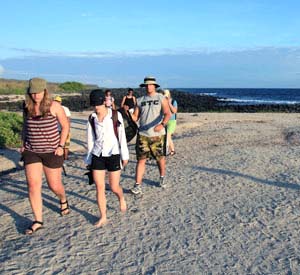 Inhabitants of Santa Cruz, San Cristobal, and Isabela islands were evacuated to safe areas since 06:00 due to the tsunami warning in the Ecuadorian coasts.

In Santa Cruz, the evacuation to the top of the Bellavista parish (10 minutes from Puerto Ayora) was done in order. Inhabitants of San Cristobal island, were transferred to El Progreso parish while the Port Authority of the island ordered–in a statement–to suspend all sea activities. Activities carried out at sea should not move to depths greater than 100 meters. Mobile phone and Internet communication is unstable, especially in Isabela Island.

“We were informed that the wave would arrive at 17:00 (estimate) so people took the evacuation process more calmly. They are also going up (to El Progreso) with bags of clothes, food, and once they’re up they will not be able to get down. It was ordered to the sailing ships–especially with the tourist boats– to go to the nearest port and that’s being done,” said Enrique Ramos, director of El Colono newspaper.