The tourism sector will lose $ 40 million this holiday

Around 80% of hotel reservations were canceled these days nationwide. This week there was not even 10% room occupancy.

This a few days after starting the national holiday for the Independence of Guayaquil, which goes from October 9 to 11, 12 and 13 of this month.

The paralyzes, marches and protests against the economic measures announced by the Government last week affect the tourism sector.

According to data from the Ministry of Tourism (Mintur), the holiday of October 9, 2018 generated a hotel occupancy of 42% only in internal movements. 1,115,215 overnight stays and $ 38 million in total expenses were recorded. 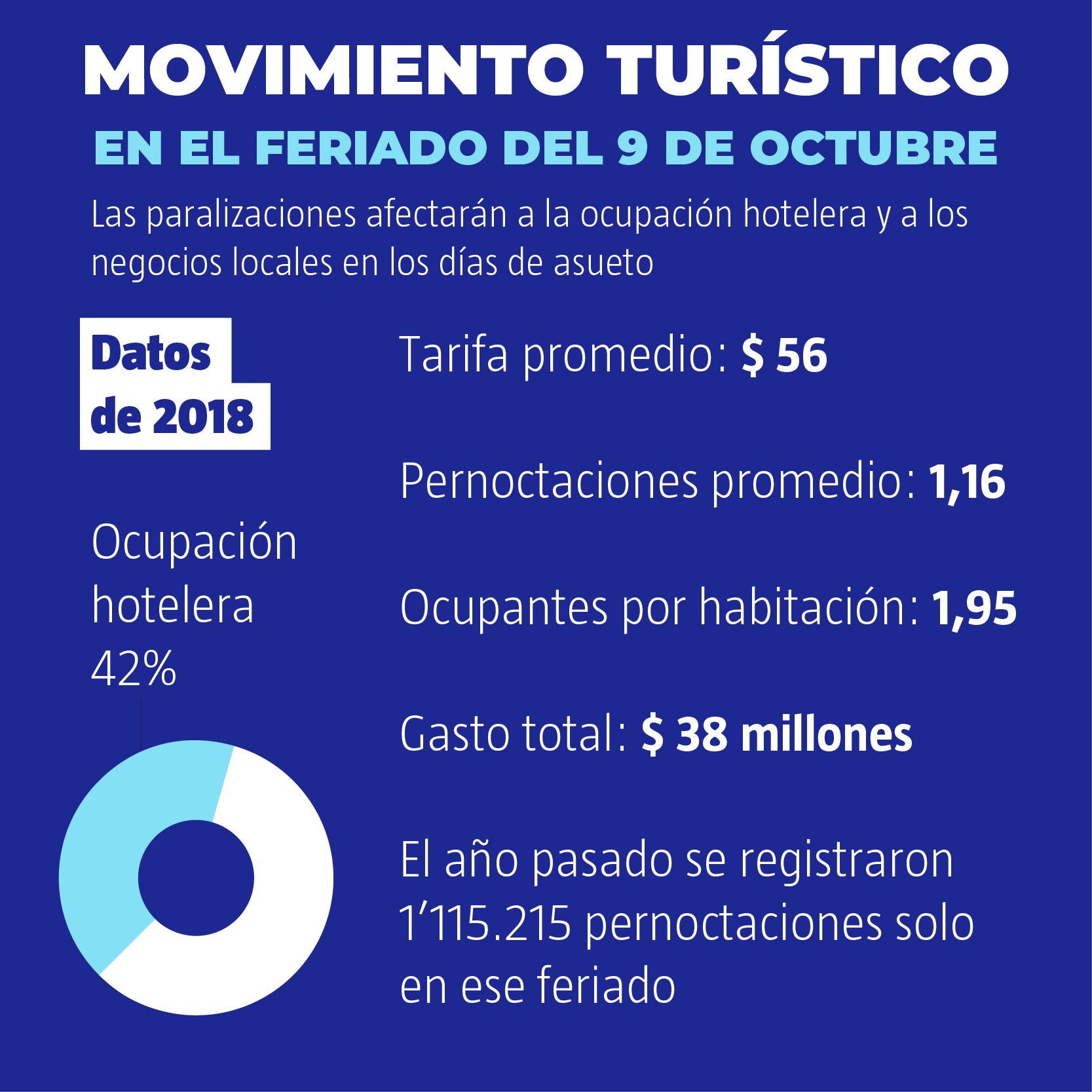 Holbach Muñetón, president of the Federation of Chambers of Tourism of Ecuador, indicates that these figures are higher.

Ensures that a holiday energizes the national economy between $ 40 and $ 88 million. Only Guayaquil – Muñetón continues – will cease to receive around $ 10 million next weekend due to the state of exception and the decision of the City Hall to suspend all public shows.

According to the representative of the tourism sector, the low hotel occupancy affects the entire business chain, such as guides, travel agencies and restaurants. In addition to this, Muñetón says that hotels are shortages, their food reserves and supplies are about to end, as their wholesale suppliers cannot transport products.

“This not only affects the national tourist who must cancel their vacation, it also affects foreign tourists and business travelers. This must be solved for the good of Ecuador, ”he said.

Due to the demonstrations, more than 200 foreign tourists were trapped on roads and hotels in recent days.

Rosi Prado de Holguín, Minister of Tourism, in an interview with EL TELÉGRAFO explained that the majority of affected tourists are European.

So far, Mintur, along with other ministerial entities, has evacuated 144 tourists; 56 older adult travelers are still in Guamote. Prado said that in the latter case they go to the pastor of the place to coordinate the departure of tourists. Another of the most critical cases was recorded in Otavalo, as hotels no longer had food for travelers.

There were also tourists trapped in Riobamba, Ambato and Baños. In the Nuevo Rey hotel in Guayaquil, for example, travelers from Cuenca and the Orient had to stay inside the facility for three days.

On Monday, October 7, 2019 they were able to return to their cities. Napoleón Jiménez, owner of the lodging and president of the Association of Hotels and Hostels of Guayas, said that neither he nor several colleagues currently have clients.

All reservations for this holiday were canceled and they had to return the money. Remember that in previous years, the occupancy of your hotel reached 70%. In addition, he considers that Guayaquil was the starting point for other tourist attractions such as beaches.

“Before this strike, the hotel sector was already experiencing a 50% impact. Now it will be 100% because the occupation is at zero, ”said Jiménez.

At the discretion of the branch representative, tourism is a sector that everyone should take care of because one day the oil will end and this will be the activity that generates more income to the country.

Faced with this situation, the Minister of Tourism urged “all mayors, especially those who are supporting this strike, to think that the future of its people is in tourism and should support for this to arise.”

According to Prado, the Mintur sent information to all embassies and consulates to communicate with their nationals and suggest they take all the precautions of the case during these days.

“If the images that are being passed on to the world are from cities where protesters are damaging everything, nobody is going to risk coming here. And then recovering the traveler’s confidence will be difficult. Losses will be millionaires, ”said Muñetón.

Jiménez agrees with him. He thinks it will take months for travelers to return.