The uncertain management of hospital waste 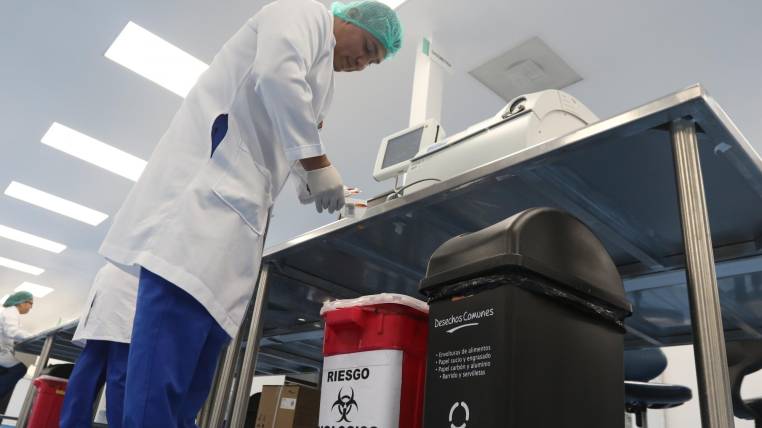 To an adjacent treatment plant, which occupies about 1,000 square meters, about 1.5 tons of materials contaminated with blood or other body fluids and other hazardous waste that daily produce medical care activities in the two hospitals of the hospital complex Alejandro Mann, in Guayaquil.

There, these infectious products are transformed into harmless garbage, through the use of a technology called an autoclave, which performs the same functions as a medical instrument sterilizer.

A similar waste treatment is carried out at the Luis Vernaza hospital, where four tons per day are decontaminated in an own processing plant.

The three hospitals of the Welfare Board of Guayaquil apply this technology since 2012. They are the only ones in the country that autonomously manage their risk waste, says Freddy Matamoros, head of Engineering at the Alejandro Mann complex.

The case of the three welfare units is an exception. In Ecuador, 10,864,289 kilograms of hazardous hospital waste are produced annually. Of this volume, almost everything is delivered to municipalities (58.2%) and accredited environmental managers (30.6%) for their treatment, according to the latest report from the National Institute of Statistics and Census (INEC), which reports 2016 figures.

The research, carried out last year, considers the management carried out by 4,201 public and private health establishments, with and without hospitalization, but does not take into account the private medical offices in the country, of which the treatment is unknown. They give their hazardous waste.

Of the 10,864,289 kilograms generated nationwide, there are no records of the type of final disposal that was given to 30% of that volume (3.72 million kilograms).

The underreporting in the figures draws attention to Francisco Andino, former Minister of Health. “You should know what happens in the private offices, which should report by regulation and obligation, under penalty of sanction by the health control entity,” he told EXPRESO.

The management of infectious waste in a health unit involves several processes. Freddy Matamoros estimates that at the hospital level there are flaws in the classification of these elements. “You can find that hazardous waste is placed in black cans, where only common waste should go. That mistake could create pockets of contamination, “he explains.

Those consulted by this newspaper agree that the controls should be improved and the entire line of the process reviewed to establish whether the regulations are complied with.

The Agency for Quality Assurance of Health Services and Prepaid Medicine (Acess), the competent entity, had in its records last year to 20,124 establishments providing services.

This agency, attached to the Ministry of Public Health, reports that waste management is one of the items with frequent non-compliance, according to its latest report on accountability.

EXPRESO did not obtain, until the close of this edition, a report that requested the Ministry of Health about health facilities that keep records of hazardous waste and details about the controls exercised over this management.

Waste. Guayas (31.5%) and Pichincha (30.4%) concentrate the greatest amount of hazardous waste produced by health units, according to the INEC.

“I believe that there is no adequate management of hospital waste here. The error is that these dangerous elements are handled like any garbage. ”

Head of Environmental Management of the Welfare Board of Guayaquil

The majority of hospitals in the country have not obtained their environmental licenses. In many of them there is no good segregation of waste. (I)